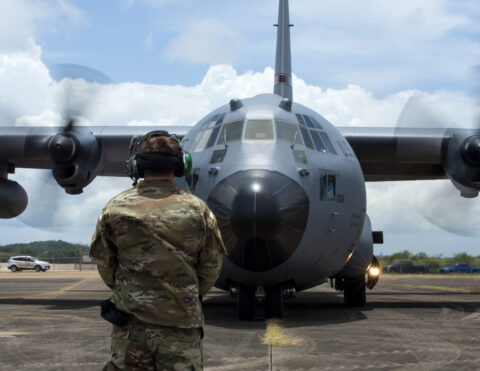 August 18, 2021 (ST. CROIX, Virgin Islands) — The saying “train like you fight” is something the Airmen from the 133rd Contingency Response Flight (CRF) live by. Within 36 hours of notification of a simulated hurricane, they were on the ground in St. Croix, U.S. Virgin Islands, conducting airbase operations in support of a larger natural disaster response mission.

“We exercise to test our ability to mobilize and support domestic operations and humanitarian aid missions,” said Lt. Col. Jason Christensen. “Three contingency response units from California, Minnesota, and Texas [are working out of] the island of St. Croix. In addition, Kentucky’s [123rd Contingency Response Group] opened up an airfield in Aguadilla to allow passengers and cargo movement.”

Exercises designed like this one have an underlying theme: partnership. By bringing multiple contingency response force organizations together to train and share best practices, the CRF community is better prepared to respond to the next real-world mission.

“We are a small community and have communicated with each other, but rarely meet,” said Master Sgt Kevin Hedlund. “This exercise allows us to meet each other in person and strengthen our relationships.”

Hedlund continues, “For most of the [133rd] CRF members, this was their first opportunity to view what the contingency response mission is about. We had the opportunity to learn to rely on each other’s strengths to accomplish tasks in a chaotic environment.”

The organizational structure of a contingency response team is different from traditional units. They are made up of Airmen from multiple career fields: air transportation, loadmasters, command post, radio frequency transmissions, airfield management, personnel, aerospace ground equipment, and weather. Together, the team is capable to achieve the mission as a stand-alone entity. After being assigned to the contingency response team, Airmen complete a three-week Field Craft Contingency Response course where they learn base defense strategies

While this exercise was shortened due to real-world circumstances, it was still a success. New members received critical experience while others refreshed on tasks to ensure qualifications remain current.

“The CRF team did extremely well,” said Christensen. “…We are capable of doing more than what we are designed to do.”