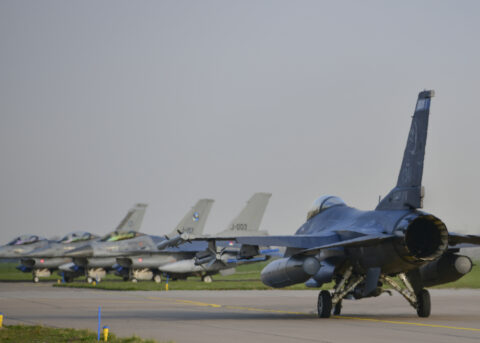 Frisian Flag will allow all international participants of the exercise to execute training on operational tactics with multiple coalition partners like Germany, Poland, France, and the United States.

“The exercise allows us to train alongside our European allies and fly with several types of fighter aircraft to ensure readiness for a variety of missions,” said Lt. Col. Paul Thornton, 179th Fighter Squadron commander and Mission Commander for the Air National Guard.

“During Frisian Flag, we are able to practice and be exposed to multi-nation air-to-air, surface-to-air threat scenarios as we would in a wartime scenario; vital training that isn’t easily accessible back home.”

This international partnership helps affirm commitments and support to NATO partnerships, shows the U.S. interest in supporting Europe, and gives the guardsmen participating a unique opportunity to ‘train as they fight.’

“It’s important for us to be here and show our commitment to the defense of our allies and I think it is a symbol of reassurance that we will be ready to provide deterrence against any potential adversaries,” said 1st Lt. Chaz Smidt, a 148th Fighter Wing F-16 pilot.

Military operations are becoming increasingly about international cooperation, which requires extensive education, instruction and training. Training together in international collaboration is necessary to ensure air defense responsibilities and facilitate international missions in the future.

“This is a great opportunity for the offices outside of maintenance group and the aviators to work together, see how other offices work, to be close to the flight line and get real exposure to the mission that we do,” said Senior Master Sgt. Katrina Patterson, 148th FW Logistics superintendent. “This exercise gives everyone a chance to solidify the whole airman concept.”

After the exercise comes to an end, the Airmen will return home to the United States and back to their role of traditional guardsmen.

“I am incredibly proud to bring the squadron over here, to represent the United States, the Air Force and show that we stand with our NATO partners against any threat to our shared interests around the world,” said Lt. Col. Thornton.