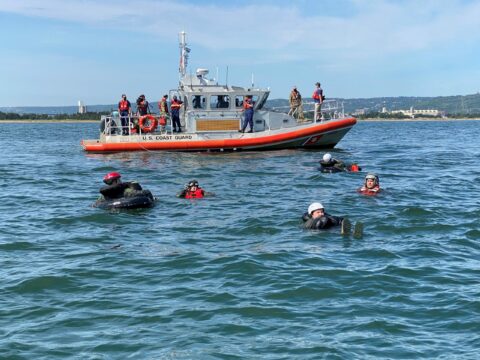 Personnel from U.S. Coast Guard Station Duluth, a regional search and rescue first responder on Lake Superior, transported F-16 pilots and aircrew flight equipment specialists from the 148th Fighter Wing, using an RBM-45628 response boat, into 60-feet of water.  Pilots wore OTS-600 anti-exposure suits which provide protection against hypothermia.  They also utilized equipment and water survival techniques that would be required if they ejected from an aircraft over water.

“We work on survival equipment every day,” said Tech. Sgt. David McParlan, an Aircrew Flight Equipment specialist with the 148th Fighter Wing.  “Using the equipment in Lake Superior put our training into perspective.  We read tech data and trained on survival techniques such as bailing water from a raft, but being on the big lake and actually bailing water is a completely different experience,” McParlan added.

The 148th Fighter Wing has access to airspace spreading 300 miles long over Northern Minnesota, Wisconsin, the Upper Peninsula of Michigan and Lake Superior.  Lake Superior is the largest of the Great Lakes with 31,700 square miles of water surface area with an average depth of 1,333-feet.   Water temperatures range from 33-degrees in the winter to 70-degrees in the summer months.

“Coast Guard personnel provided helpful cold water survival strategies,” said Lt. Col. Brian Scott, Chief of Safety with the 148th Fighter Wing.  Scott, who was one of the pilots hoisted out of Lake Superior stated that “we are better equipped to handle this kind of emergency if needed” because of this training event.

Personnel from both the 148th and the Coast Guard learned and experienced communication protocols and processes which is one of largest benefits of interagency training.  “Working with the Coast Guard provided us with greater clarity on the water survival and rescue process from their perspective,” said 148th Fighter Wing Commander, Col. Chris Blomquist.  “Today’s training definitely boosts our confidence as we fly and train over Lake Superior.”