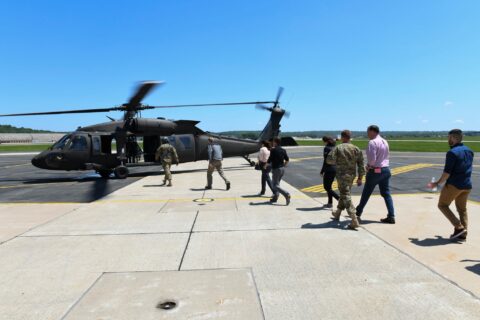 June 10, 2019 (ST. PAUL, Minn.) — More than 60 Minnesota employers visited Holman Field in St. Paul, June 5, 2019, to get a feel for what their employees who are members of the Minnesota National Guard’s 34th Expeditionary Combat Aviation Brigade do while they are at military training.

Most Minnesota National Guard soldiers serve their country in the traditional part-time role of one weekend a month, with a two-week annual training each summer. Outside the military, Guardsmen work in various civilian careers for firms or organizations, or for city, state, or the federal government.

The event, also known as a Boss Lift, gave employers a tour of the National Guard facility and a chance to ride in the military aircraft that are flown and maintained by the 34th ECAB. The Boss Lift was jointly hosted by the Minnesota Committee of Employer Support of the Guard and Reserve and the St. Paul-based 34th Expeditionary Combat Aviation Brigade.

“On D-Day over ten percent of our citizens wore the uniform,” said Bob Boone, ESGR Boss Lift Coordinator for Minnesota. “While today, the percentage is less than one. Reserve component soldiers are an important part of the force today.”

Currently, National Guard and Reserve component soldiers comprise more than half of the U.S. Army. Reliance on the reserve component is cost effective, and provides hometown support for U.S. service members. An important part of this support is from those who employ citizen soldiers.

ESGR plays an important role by working to maintain and strengthen the bond between service members and their employers. This all-volunteer organization has three primary functions: education, recognition of employers, and mediation between employers and service members.

“This past year, we had over 100 volunteers working in seven regions in Minnesota,” said Boone. Volunteers engaged 1,491 employers and 10,878 service members. Their activities included conducting unit briefs, supporting Yellow Ribbon events, educating and recognizing employers and providing mediation. The ESGR supports the military throughout Minnesota, including the ECAB, commanded by Col. Gregory Fix.

“This event provides employers insight on the criticality of the ECAB mission,” said Chief Warrant Officer 4 Stephen Schiffli, who served as the Boss Lift Officer in Charge. Schiffli knows first-hand the important relationship between soldiers and their employers. Currently serving as the 34 ECAB Aviation Mission Survivability Officer, Schiffli has been a traditional Guardsman for 32 years. He is also the Buffalo County Emergency Management Director for Buffalo County, Wisconsin. The ECABs upcoming deployment will be his fifth.

After lunch and an orientation to the unit and the ESGR, employers participated in a 30-minute UH-60 Blackhawk helicopter flight that took them along the St. Croix and Mississippi River corridors. A UH-60 Blackhawk mechanic oriented them to the capabilities and configuration of the aircraft.

Employers were invited by their service member employees. Steven Benda from Benda Engineering headquartered in Cokato, Minnesota, was invited by his employee and son, 1st Lt. Logan Benda. Logan’s brother is also in the service.

“With two sons in the military, the family business is tailored to support their service,” said Steven Benda. He was excited to have the opportunity to learn more about unit capabilities. “Being able to experience a Blackhawk flight is a once in a lifetime experience,” said Benda, “I was awestruck by the skill level of the pilots.”

Stephanie and Allen Hurst, Vice President and President/CEO of Trusted Semi-Conductors in Brooklyn Park, Minnesota, were invited by pilot Chief Warrant Officer 2 Tressa Marquardt. Marquardt resides in Plymouth, Minnesota. “I like to share what I do in the National Guard,” said Marquardt, “I am confident that people will be interested in what we do.”

Maj. Jed Gadient invited Mark Ellers from MC MetalFab of Lino Lakes. Mark served in Germany from 1976 to 1979. “Our firm works to hire veterans and members of the Reserves and National Guard,” said Ellers, “Service members are punctual and consider themselves partners in the business.”

Staff Sgt. John Gleason invited his employer, Tina McNamara, Under Sheriff for Court and Security for the Ramsey County Sheriff’s Department. Gleason has been a member of the Minnesota National Guard since 2008, and serves as an officer in the juvenile court. “I am honored to be here, and excited to learn more about what John does in the military,” said McNamara.