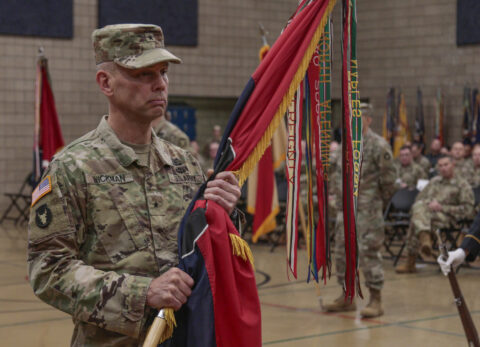 November 3, 2019 (ROSEMOUNT, Minnesota) — The Minnesota National Guard’s 34th Red Bull Infantry Division welcomed a new command team during a combined Change of Command and Responsibility Ceremony, Nov. 3, 2019, at the Rosemount National Guard Armory. Many former and retired division commanders and command sergeants major attended the ceremony alongside current soldiers and the family and friends of both outgoing and incoming command teams.

With the passing of the division colors, Maj. Gen. Benjamin Corell, outgoing commander of the 34th ID, relinquished command to Brig. Gen. Mike Wickman, the incoming commander. Continuing one of the oldest traditions in the military, the passing of the colors symbolizes the transfer of command authority and responsibility correlated with commanding soldiers.

After reflecting on the rich and distinguished history of the Red Bulls, Wickman remarked, “I am humbled and honored to have this responsibility passed to me.”

Wickman began his military career in 1989 as an armored crewman. In 1990, he entered Officer Candidate School at Ft. Benning, GA, and was commissioned as an Armor Officer on June 1, 1990. He is now dual-hatted as the Assistant Adjutant General – Army for the Minnesota National Guard.

Following the installation of the new commander, Command Sgt. Maj. Joseph Hjelmstad, outgoing senior enlisted advisor, passed responsibility to Command Sgt. Maj. Stephen Whitehead with the symbolic passing of the non-commissioned officer sword. The sword symbolizes the heart of the division and stands as a reminder of the past glories and traditions, as an inspiration for present endeavors, and as a guide to the future.

The presiding officer for the ceremony, Maj. Gen. Jon Jensen, the Minnesota National Guard’s Adjutant General, presented both Corell and Hjelmstad with the Minnesota Distinguished Service Medal for their dedication to the unit which greatly enhanced the overall capability of the division.