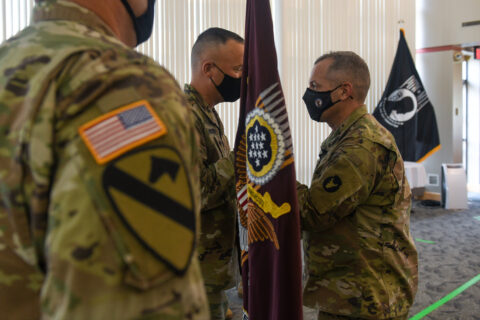 August 20, 2021 (ST. PAUL, Minnesota) — U.S. Army Lt. Col. Scott Hawks has assumed command of the 55th Civil Support Team from U.S. Army Lt. Col. Ryan Cochran on Aug. 20, 2021, at the 133rd Airlift Wing in St. Paul, Minnesota. The 55th CST has a unique domestic mission supporting emergency preparedness operations involving the use or threatened use of weapons of mass destruction and terroristic threats. This team of Soldiers and Airmen work with local authorities through the Twin Cities metro area and the state of Minnesota. Just like other Minnesota National Guard units, they are #AlwaysReady

Hawks is coming back to the 55th CST after a tour as the MNNG state public affairs officer. Cochran will continue his service as the executive officer of 84th Troop Command.