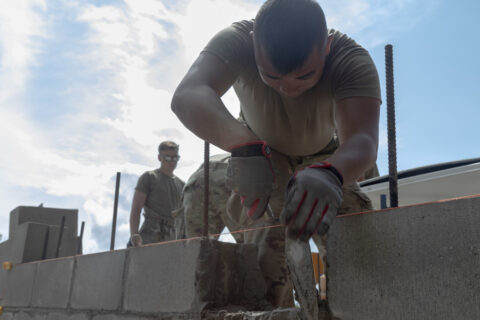 August 12, 2020 (Camp Ripley, Minn.) — Soldiers from the 851st Engineer Vertical Construction Company have been working on a remodel of the Demo 4 Range at Camp Ripley. The company uses troop projects to improve on their skills and ability to operate heavy equipment as well as completing their mission essential tasks.

“Troop projects are something that Camp Ripley needs done from a construction perspective,” said Capt. Nick Aldrich, commander of the 851st. “They give that job to the National Guard to accomplish, and it allows us to exercise our specific MOS.”

The project at Demo 4 is unique because both horizontal and vertical teams are on the site. The service members with horizontal jobs are building up berms while those with vertical jobs are working on an observation bunker.

“It’s given the chance for the soldiers to actually see, touch, feel and do the thing that they signed up for,” said Aldrich.

For one service member with the vertical team, the project has given him the chance to learn and practice the skills required of a carpentry and masonry specialist.

“We started with some excavation,” said Spc. Andrew Randall, a carpentry and masonry specialist with the 851st. “Then there was rebar, how to bend it and cut it, how to place it and what it actually does. We poured concrete and learned how to finish it. Now we are starting to build up by placing CMU blocks. You get all the different levels of what goes into putting up a structure like this.”

Randall enlisted in September of 2015 and deployed with the 851st to Kuwait from 2018 to 2019. Originally from Inver Grove Heights, he has a bachelor’s degree in construction management and works as a Project Engineer for Stevens Construction in Bloomington, Minnesota.

Coming to drill allows him a chance to be on the job site and learn from more experienced people. It also helps him become more efficient in his civilian career as a construction manager because it gives him more respect and understanding for the people that perform the work as well as the timeline and the strain it places on the body.

“Sometimes we have a lot of people on the jobsite,” said Randall. “When we’re doing concrete, there’s a lot of different jobs to do and it’s not a big deal. But when we do CMU, it can get cramped, but they are heavy. Having more people lets us take breaks and switch out.”

After completion of Demo 4 around September 2022, the range will be a safer space and more user friendly for various demolition training such as hand grenades or other explosives.

“It will be a lot safer range,” said Chief Warrant Officer 3 Jason Levin, a construction engineer warrant officer who also serves with the 851st. “It will be able to be utilized by more individuals at one time. Right now, they can only take so many people out there at a time because they don’t have the safety setbacks that are required.”

The berms will bring the range into compliance with range regulations Army-wide. In addition to the berms, the horizontal team will be creating a staging area/parking lot along with a walking path leading to the observation bunker.

Spc. Morgan Stommes, a horizontal construction engineer with the unit says she takes pride in having the opportunity to work on a project that will bring meaning to the base and other companies who train here.

“I feel like the work we are doing is going to be worth something,” said Stommes.

For Stommes, the work she does at drill is similar to her job working on a survey crew for the Minnesota Department of Transportation. She enjoys having the opportunity to operate the equipment in a military capacity. Being part of the team has given her confidence to try new things outside of her normal scope of work.

Most of the service members in the 851st share a mutual pride in serving in the Minnesota National Guard and serving with each other.

“I’ve worked with some of the greatest folks that I’ve met in my military career,” said Aldrich. “With a full time staff that gets stuff accomplished and a group of the some of the hardest working soldiers I have seen in the military; I am honored to be a part of the team.”