A Leadership First for Women in the 175th RTI 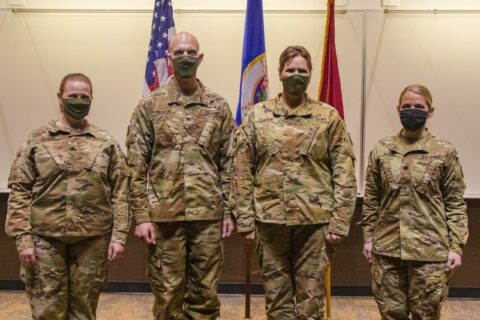 March 31, 2021 (CAMP RIPLEY, Minnesota) — Lt. Col. Amber Manke assumed command of 1st Battalion, 175th Regiment, Regional Training Institute, March 20, 2021 on Camp Ripley. The inspirational observance of her change of command brought to light a fact that for the first time in regimental history, three women are leading each of the subordinate commands.

Although pioneer leaders such as now Brig. Gen. Stefanie Horvath once commanded the nationally-recognized school house, this will be the first time in the organization’s history that all three commands are under the direction of Minnesota National Guard women.

“I have had the opportunity to work both with and for great female leaders in the Minnesota National Guard,” said Col. Jason Benson, 175th RTI Commander. “Having women in senior positions, especially command positions, is essential in providing the example for our junior soldiers and officers.”

Women have taken an active military part in every American conflict from the foundation of this nation. Often times in disguise or in the background, these women endured the roadblocks, hardships and ridicule of their male counterparts in order to pave the way for future generations and to complete the mission.

“We have made significant progress in incorporating women into vital roles in a historically male-dominated military,” said Manke. “Socially, traditionally and tactically it just wasn’t accepted that women could contribute on the battlefield.”

“It’s hard to describe the pride I feel as commander of 2nd Battalion,” said DeGier. “I have an incredible respect for our instructors and the job they have in developing our future leaders. I am humbled and privileged to be a part of that team.”

One of the many “door openers” within the Minnesota National Guard was 1st Lt. Joanie Moyer, the first female company commander in the Minnesota National Guard. In 1980, she took command of the 47th Viking Infantry Division’s Material Management Center. Known to be “naturally aggressive,” proving her skill and military integrity by earning the number one spot in the class out of sheer competitiveness.

“It is my hope to influence young leaders at the schoolhouse to recognize not only the value of education – never stop learning – but appreciate others’ experiences and strengths. It provides a different perspective. Lastly, tolerate second chances; failure facilitates learning and there is life after,” added DeGier.

In 2013, the ban on women in combat was finally lifted, and most branches were given a period of time to develop leaders in order for a smooth transition for full integration. By 2015, two women completed Army Ranger School, which led to the decree that all combat duties should be open to women as well.

The past few years have seen women gaining advancement to some of the highest levels of authority in the military. Women in the military have come a long way since World War II, and will continue to be seen and heard in their ever-growing roles in all of the branches of the U.S. military.

“I am honored to have the opportunity to command the RTS-M where I am continuously learning from some of the best maintainers and instructors in the Army,” said Carlson. “I’ve been fortunate to be mentored and supported by great commanders and leaders throughout my career. I hope that I can match their leadership and pass on the valuable lessons they have taught me.”