A monument built from kindness, compassion and empathy 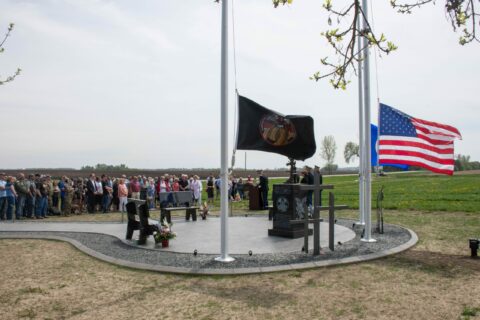 May 19, 2021 (KIMBALL, Minnesota) — The official dedication of the Minnesota Army National Guard Fallen Soldiers Memorial took place May 16, 2021, in Kimball, Minnesota, to honor three Minnesota National Guard Soldiers who were killed Dec. 5, 2019, when a Black Hawk helicopter crashed during a maintenance test flight.

Just hours after the crash, Helen and Larry Krippner, the owners of the property where the helicopter crashed, placed a temporary flag pole to fly the American flag near the site. This simple gesture started a journey to build a more permanent memorial to serve as a place where people could go to grieve, remember and honor those who were killed.

“On December 5, 2019, for reasons unknown to us at the time, God chose us,” said Helen Krippner. “What started as raising a flag in honor of these men has now grown to be a beautiful memorial. These soldiers have given the ultimate sacrifice and will always be in our hearts and a part of our family.”

In addition to the Krippners, the citizens and businesses from the surrounding rural communities, stepped in to assist the first responders and Minnesota Guardsmen who responded to the crash site and provided their support to help establish the memorial.

“The outpouring of support by community members and businesses that had no association prior to this incident has shown us all what coming together for a cause can do,” said Maj. Nate Burr, who commanded the unit in 2019. “Every aspect was carefully thought through from the placement of each personal bench to the painstaking details of the battlefield cross.”

“Community helps us get through tough situations and this certainly has been one of the toughest,” said Maj. Gen. Shawn Manke, the Adjutant General of the Minnesota National Guard. “From the first responders the day of the accident to the local businesses and local families that helped our soldiers and the team recover the aircraft through the journey that has gotten us here today.”

The memorial serves as a tribute to the kindness, the compassion the empathy and the love of country of the members of this local community and will provide families, unit members, friends and the community a place to come and remember the sacrifices of the fallen for years to come.

“Every day in every part of the world, American men and women put their uniform on to serve our country and whether they are close to home or overseas, they also put their lives on the line,” said U.S. Senator Amy Klobuchar.