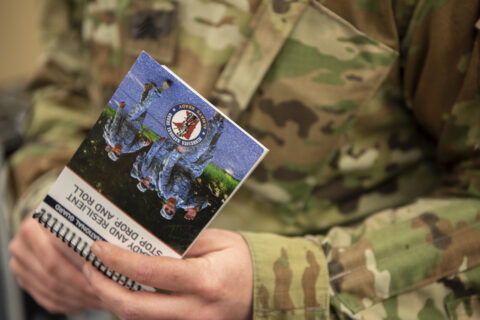 Oct. 30, 2018 (ST. PAUL, Minnesota) — After a decade of learning resilience by PowerPoint, the Minnesota Army National Guard is taking training down to the squad level.

“The thing that we were always missing [with the old program] is that people would hurry up through the PowerPoint and get it done and never actually did the practical exercise part of it,” said 1st Sgt. Jeanette Chaffee, the Resilience, Risk Reduction, and Suicide Prevention (R3SP) noncommissioned officer in charge, as well as a Master Resiliency Trainer.

The Minnesota National Guard’s Ready and Resilient program is simpler and more personal, said Chaffee. It’s no longer a large company-sized training. It is a squad leader leading a discussion with their squad on different topics like relationships, risky behavior and overall wellness guided by a new booklet the R3SP created.

The small group is designed to help Soldiers build trust with those they interact with the most. It’s also an opportunity for them to connect with one another and understand that whatever struggle they are facing at the moment, they have their Army family to lean on for support.

The goal of this training is to talk about how we would approach life stressors, like a relationship ending, before we get in that situation so we know how we can cope with it rather than being impulsive, said Chaffee.

These small group discussions can be tailored to a unit’s Unit Risk Inventory as well so they are addressing the areas their Soldiers need to improve in the most: relationships, risky behavior or overall wellness.

“Let’s talk about problems that people might have. We may not be dealing with it as a squad right now, but we might later on,” said Chaffee as an example of what a squad leader might say. “So let’s talk about it. What would we do? What have we done?”

The Minnesota Army National Guard is switching to this new program because it hasn’t been changed in over 10 years. The Master Resiliency Training was more combat focused. The examples and scenarios talked about Soldiers on or returning from a deployment and dealing with being away from family.

This made it difficult for young troops to relate to, said Chaffee. So they would check out. In reality, these are life skills that can be used whether you’ve been on a deployment or not. Several of the coping skills are still available in the booklet, but instead are used as additional tools.

The MRT skills can also be long and complex, which makes them difficult to execute in the heat of the moment.

“People need something quick and simple that can help jolt them out of that thought so they can think more rationally,” said Chaffee.

In preparation for the implementation of Ready and Resilient, over 100 master resiliency trainers, resiliency training assistants and suicide intervention officers across Minnesota were trained on the new program. Theses Soldiers will go on to teach the squad leaders at their respective units and be the subject matter experts.