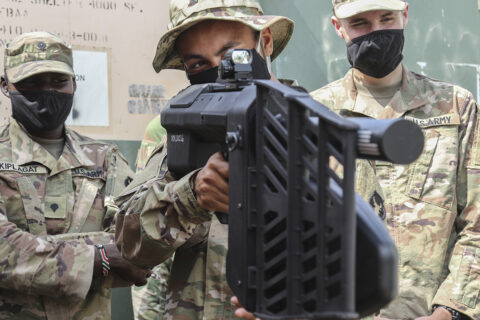 Bravo Company is part of Task Force Bayonet, a group of over 900 National Guard Soldiers from Minnesota, Iowa and Illinois that are currently deployed throughout the Horn of Africa in support of Operation Enduring Freedom. The task force provides security forces to military bases throughout the region.

“The training was designed to supplement UAS/CUAS training Task Force Bayonet received prior to deployment,” said Matthew Delay, instructor with Asymmetrical Warfare Group out of Fort Meade, Maryland. “All Soldiers should be confident with all basic aspects of CUAS with reference to detection, reporting and response.”

Task Force Bayonet is the first task force and battalion to received C-UAS training from Asymmetrical Warfare Group, said Delay. In the past, the 2nd Battalion, 135th Infantry Regiment has trained on subterranean training tactics with AWG at Muscatatuck Urban Training Center near Butlerville, Indiana.

During the training, Soldier’s worked with the Drone Defender V2, an electronic warfare weapon that is capable of downing and disabling a small Unmanned Aircraft System also known as a drone, said 1st Sgt. Andrew Goodman, the senior noncommissioned officer of Bravo Company. The weapon which weighs about 15 pounds is capable of being operated continuously for two hours of battery life.

“The weapon is designed to defeat the radio control link between a drone and its operator,” Goodman said. “It can also disrupt GPS and video feed of a drone.”

In a time when electronic warfare has become a feasible threat worldwide, Delay said preparation is key.

“Our forces experienced emerging threats with improvised explosive devices back in 2000,” he said. “The better we are prepared now through education and training will save lives in the long run.”

Goodman said that technology is available to weaponize Small Unmanned Aircraft Systems in the form of Improvised Explosive Devices and that the Drone Defender V2 is the first line of protection against these threats, and they help to reduce collateral damage resulting from typical use of firearms to shoot down enemy aerial targets.