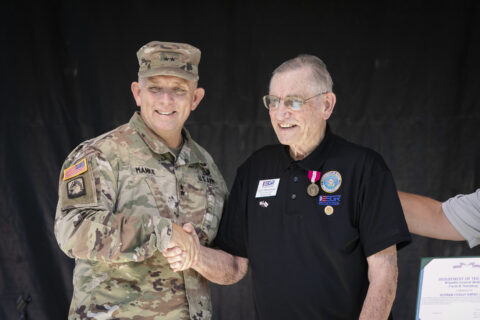 The mood was festive even before the Minnesota National Guard’s 34th Red Bull Infantry Division Band performed their first note on the morning of the Minnesota State Fair’s Military Appreciation Day August 30, 2022, in Falcon Heights.

On Tuesday, hundreds of service members, veterans, their families, and supporters gathered to celebrate the annual event. The purpose of this year’s event was to honor the thousands of employers of members of the Minnesota National Guard, other reserve members, and their families.

Employer Support of the Guard and Reserve, known as ESGR, is celebrating its 50th year of promoting cooperation and understanding between Reserve Component service members and their civilian employers. The organization assists in resolving conflicts that arise due to an employee’s military commitment.

The ceremony kicked off at the Leinie Lodge, where Minnesota Governor, and Commander-in-Chief of the Minnesota National Guard, Tim Walz signed a statement of support for ESGR, service members, and their families.

“Our service members and their families depend on support from Minnesota employers and communities to accomplish our state and federal missions,” said Manke. “I have heard numerous stories of how employers have shown their appreciation to our Minnesota service members, and I know it has not been easy, especially these last couple of years with the multiple activations.”
After the Red Bull Band wrapped up their set, the celebration moved to Dan Patch Park, where more than 45 military-connected organizations staffed booths providing information and live music played entertaining fairgoers from across the region.

In between musical acts, ESGR members recognized 23 employers who have gone above and beyond for the service members who work within their organization. The service members and approximately 65 representatives from the companies nominated, were recognized on stage together.

The master of ceremonies was Jack Grams, the awards director for Minnesota’s ESGR. He shared the story of Sgt. 1st Class Kolt Krumpos, who nominated McNeilus Trucking and Manufacturing Incorporated.

Grams read from Krumpos’ nomination letter, “During my first deployment, I was unaware that I could receive wage compensation for lost wages. I inquired with [our company’s human resources department] upon my return and a large check was cut the following week. Since then, policies have been implemented to ensure all veterans are aware of the benefits.”

Bruce Cherney serves as the Minnesota ESGR’s volunteer support technician . He is the only full-time ESGR employee in the state and the liaison between the Minnesota ESGR State Committee Chairman, retired Air Force Col. Tom Simonet, and regional field directors.

“After my retirement from the Army Reserves, it is a privilege and an honor to continue to work with Servicemen and women through the ESGR organization,” Cherney said.

Cherney is also responsible for reporting the planning and execution of state committee activities and events to the ESGR’s national headquarters support staff.

He discussed some of the ESGR’s other initiatives, “The organization develops and promotes supportive work environments for service members through outreach, educational opportunities, and employer recognition to increase awareness of applicable laws such as Uniformed Services Employment and Reemployment Act (USERRA).”

“General Norenberg commenced his service in the military in June 1953, with his last position serving in the Army Reserves as the Deputy Commander for the 88th Army Reserve Command. General Norenberg was instrumental in the inception of National Employer Support for the Guard and Reserve, standing up the first committee in 1972 and continuing his volunteerism for more than 50 years,’ said Manke. “General Norenberg’s civic activities include Department of National Security and Foreign Relations Chairman for the American Legion.”

Following the recognition of the last group of employers and service members, the Red Bull band’s Boots n’ Brass band took the stage for the last set of the afternoon, ending the day as it began – on a high note.