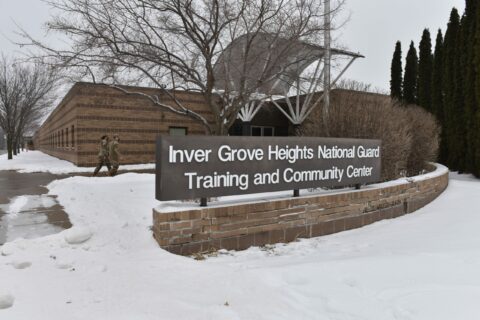 January 28, 2021 (INVER GROVE HEIGHTS, Minnesota) — Soldiers with the 34th Expeditionary Combat Aviation Brigade (34th ECAB) are transitioning their headquarters unit from the Army Aviation Support Facility #1 (AASF#1) in St. Paul, Minnesota, to the Inver Grove Heights armory as part of a longstanding plan to move the unit into a more functional building.

The 34th ECAB headquarters unit was originally based out of the Cedar Street armory, in St. Paul, Minnesota. Approximately a decade ago, they made the strategic move to the AASF#1 to accommodate more staffing needs at Joint Force Headquarters. However, this move was always a temporary solution since their presence reduced the amount of space the 2nd Battalion, 147th Assault Helicopter Battalion (2-147th AHB) had for day to day operations and drilling space.

“This made it very hard for the 34th ECAB to drill at the same time as its subordinate battalions, as they were competing for the same space within AASF #1,” said Wagner.

The 34th ECAB began their move to the Inver Grove Heights Armory in the latter half of 2020, while most of the unit was still deployed to the Middle East in support of Operation Spartan Shield and Operation Inherent Resolve. With COVID-19 mitigation policies in place to reduce the number of in-person drills, the headquarters unit had its first drill together at the new site on Jan. 10, 2020. Part of their first drill on the premises was dedicated to assigning sections office space and organizing unit equipment.

“There are really two big gains for this move,” said Wagner. “First, it provides more training space and resources for the Soldiers of the 34th ECAB.  Second, it provides much more storage area then the unit has ever had.  Previously, the 34th ECAB kept much of its equipment off site in cold storage thus reducing the service life of equipment and the ability for the Soldiers to maintain and train with this equipment on a regular basis.”

This move ensures the Minnesota National Guard continues its focus onfiscal responsibility by repurposing a resource that the Guard already owns, while maintaining a facility that will better suit the needs of their service members.

“When the move is completed it will really provide better support to the training of the 34th ECAB headquarters Soldiers, and because of the space it frees up at the AASF#1, it has the added benefit of supporting the training of the 2-147th AHB Soldiers as well,” said Wagner.