Birds of a feather: family members deploy together 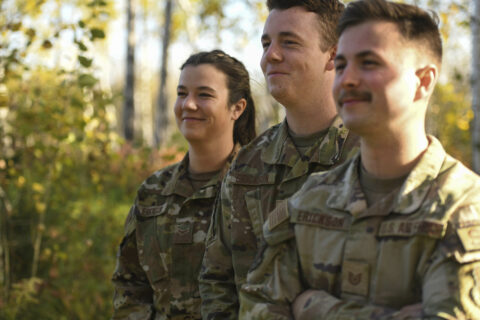 Whether it is a fond memory or something one would rather not reminisce on – most siblings are connected by a string of family experiences. For three siblings at the Minnesota National Guard’s 148th Fighter Wing, the thread connecting them is a subdued camouflage in color and has taken them around the world.

Tech. Sgt. Reid Erickson, Air Force Staff Sgt. Caden Erickson and Airman 1st Class Rylie Erickson are all siblings, born within five years of each other, and are all members of the Duluth-based National Guard unit. Over the past year, the siblings deployed simultaneously to three different locations overseas.

Reid, the oldest sibling, enlisted first in 2014 as a security forces specialist. In this capacity, he deployed to Al Udeid Air Base, Qatar in 2018 and to Niger in 2021. Reid also mobilized with much of the Minnesota National Guard in 2021 for state active duty during the unrest in Minnesota.

“I think all of us are pretty motivated, but I joined because I knew this path would set me up well for doing what I wanted – to be a police officer,” said Reid, an Esko High School alum and now officer with the Duluth Police Department.

Rylie, the youngest of the group, enlisted as a fire protection specialist. “I wanted a challenge and some experience in medical, so the fire department seemed like just the place to go,” said the sister who is a sophomore at the College of St. Scholastica.  “But, most importantly, I had to prove [my brothers] wrong when they said I might not finish the fire academy.”

Caden, the middle brother jokingly blames Reid for his interest in joining the 148th Fighter Wing. “He is the reason I took a tour and got interested, but Air Force Col. Curt Grayson, the 148th Maintenance Group commander, is the reason I am pursuing becoming an F-16[C Fighting Falcon aircraft] pilot,” said Caden, a tactical aircraft maintenance specialist, also known as crew chief, and an aviation senior at the University of North Dakota.

“When I was deployed to the 386th Air Expeditionary Wing, Ali Al Salem Air Base, Kuwait, I was able to talk to my brothers about everything that was going on and they could lend an empathic ear,” said Rylie, a Hermantown High School alum.

As all service members form bonds with ‘siblings-in-arms,’ the Erickson’s say having actual family on deployment makes the hardships they experience just a little bit easier. The three siblings joke and laugh about how their mom, Pam, requested and pushed that they all video chat at the same time during their deployments.

Now that the family has all returned home to Minnesota, the experience is a memory the siblings reminisce fondly about — a common thread that will connect them together for a lifetime.