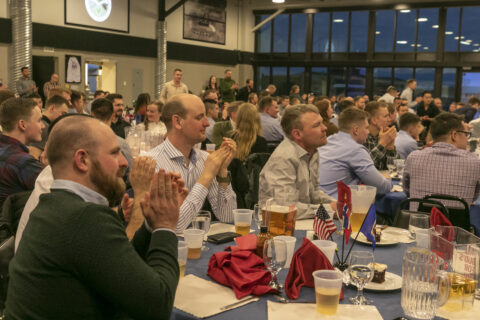 The traditional meal was part of the 49th U.S. – Norwegian Reciprocal Troop Exchange, an exchange of culture and training between Norway’s Home Guard, known as Heimevernet, and the Minnesota National Guard.

The event began with a founder of Serving Our Troops, Pat Harris, speaking about their organization’s origin. He recalled the scene when he and his teammates gathered at a local restaurant while many members of the Minnesota National Guard were serving overseas.

“At that moment we thought, ‘it’s not fair that we can sit here and have a cold one,’” said Harris. “We said, ‘let’s bring a big steak to Soldiers all over the world and send a message of support to our Soldiers and families from the people, businesses, and organizations of Saint Paul.’”

Since 2004, Serving Our Troops has served more than 110,000 steaks to service members and their families. They have supported 15 projects across multiple overseas locations in Kuwait, Iraq, Kosovo, and Djibouti. In the U.S., they have served troops and their families in Minnesota, Wisconsin, Oklahoma, and Mississippi.

Before the two nations came together to enjoy the special meal, Chaplain (Maj.) John Shay offered a blessing.

After the meal, Camp Ripley’s Garrison Commander, Army Col. Joshua Simer, offered a few words for all in attendance.

The evening ended after Lockert presented a traditional gift of friendship to the garrison commander. This year’s gift was a wolf pelt from Norway.

“The wolf represents the capability to have a pack with spirits, also long distances,” said Lockert. “We share a common thing with all the Home Guard districts.”