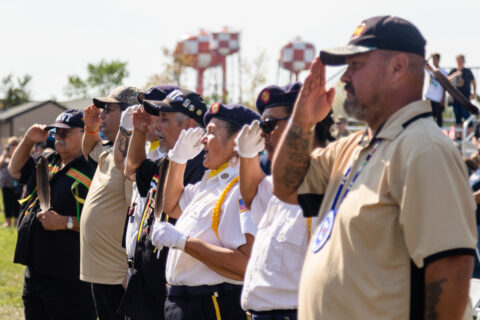 September 20, 2021 (CAMP RIPLEY, Minnesota) — Camp Ripley hosted its Open House September 19, 2021. The event, which occurs every two years, gives the public an opportunity to experience military life for a day. The Open house is a great tradition that has been running for 30 years.

“This is one of our most significant events welcoming the communities inside the gates for a look at what Camp Ripley and the Minnesota National Guard are all about,” said Army Chief Warrant Officer 3 Shane Haugen, Camp Ripley visitors’ bureau director.

The Open House and Community Appreciation event showcases the equipment used by the National Guard and the inter-agency partners that utilize the 53,000-acre state facility. This year’s theme was honoring Native American Veterans.

The theme allowed the base to continue to build on existing relationships with Native people.

“The goal for today is to open our doors to our friends and neighbors,” said Maj. Rachel Tarrats, the Training Support Unit’s Administration Officer. “To show you a little bit of what happens here.”

During a ceremony, the installation recognized the contributions made by men and women, both past and present and the lineage of the “Warrior Spirit” in Minnesota.

“When I was 19 years-old, my father and other veterans asked me to learn our language and culture so that I am able to do ceremonies for our community,” said Smith.

Smith then began to translate his prayer for the audience.

“I offered my tobacco each of the Anishinaabe, Ojibwe tradition to each of the spirits. East, south, west, north, each layer of the sky and the ground. After they accepted the tobacco, I asked the spirits to help our veterans,” said Smith.

Following the invocation, the Cedar Creek Drum Team began performing various songs including a song for veterans as the Honor Guard teams from Fond Du Lac Band of the Lake Superior Chippewa, Leech Lake band of the Ojibwe and Mille Lacs Band of Ojibwe marched in ceremonial flags.

Col. Joshua Simer, Camp Ripley Garrison Commander and Lt. Col. Eduardo Suarez, Director of Diversity and Inclusion for the Minnesota National Guard, each had an opportunity to speak before Smith began the benediction.

The event included approximately 50 vendors with displays from groups such as Military One Source, American Hero’s Outdoors and Disabled American Veterans. There were also activities for children and adults such as static displays of vehicles and equipment, providing an inside look at what service men and women use daily.

In addition, there was games and HMMWV rides available for young kids.

Across the open house grounds, tracked, wheeled, fixed wing and rotary vehicles were displayed along with civilian emergency response vehicles such as fire trucks. At each military vehicle, a group of Soldiers and Airmen patiently answered questions from both children and adults.

“We love being able to see the equipment and watching Jack explore,” said Becca, from Sartell, Minnesota.

Along with the ceremony and the static displays, there was also live music played by the 34th Red Bull Infantry Division’s Country Band and a vintage car show.

At the end of the 4-hour event, an estimated 6,000 guests visited Camp Ripley to participate in the Open House and Community Appreciation Day.