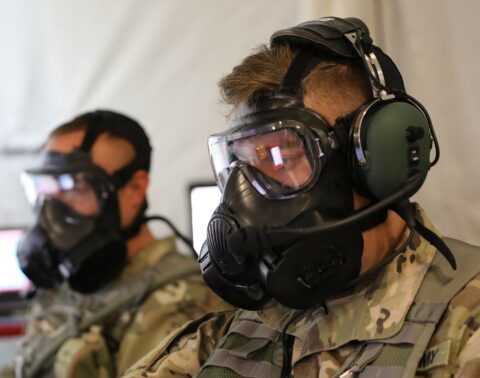 Oct. 6, 2021 (FORT RILEY, Kansas) — “How can I get any experience until I get a job that gives me experience?” This is the question written by Joseph Heller that exemplifies a catch-22, a concept derived from the namesake novel.

The 34th Red Bull Infantry Division is wrapping their participation in Warfighter Exercise (WFX) 22-1. For the division, the question would likely sound something like “How can we be proficient in warfighting until we fight a war that builds our proficiency?” Fortunately, the lessons learned over the years of military engagements that the U.S. Army has participated in has guided the organization towards designing methods for training that build the same skills needed in a real operational environment.

“The training value of a Warfighter Exercise, quite simply, is the ability to test military doctrine, knowledge and proficiency of warfighting functions in a high-stress environment,” said Lt. Col. John Hobot, who participated in this WFX as the commander of the Tactical Command Post (TAC).

When a division element deploys in support of a combat operation, there are three command posts. The TAC, the Main Command Post (MCP), and Rear Command Post (RCP). In the MCP one can find all of the war-fighting functions represented; movement and maneuver, intelligence, fires, sustainment, mission command, and protection. There will also be representation of special staffs such as the judge advocate general, public affairs, and liaison officers from logistics, personnel, as well as other units working parallel and subordinate to the division.

The RCP is staffed with logistics and administrative personnel who are at the heart of pumping the lifeblood of food, fuel, and water to forward-mobilized Soldiers.

TAC elements are designed to be small and mobile. Sent forward from the MCP for perhaps 24, 48, or 72 hours at a time to provide a command and control element over an event. Once the event has culminated, the TAC will pack up and those who staffed it will reclaim their place in the MCP.

In the modern era of warfare, network systems and technological capabilities have been force multipliers to an exponential degree.

“We can’t do our job without being connected to a sim [simulator],” said Chief Warrant Officer 3 Ryan Petersen. Petersen is a chief in the Air Missile Defense, a piece of the division protection group. “Our assets gather intelligence, surveillance, reconnaissance, and we can give this information to people in other sections that need it.”

“This allows us to refine and modify our standard operating procedures and tactics to become a truly synchronized staff that can conduct quick, honest, and accurate assessments,” said Hobot. “By doing this we create a clear common operating picture that we can provide for the commander to make decisions.”

While a WFX may not be an actual war to build proficiency, the proficiency of Red Bull Soldiers to fight a war has truly leveled up after another hard few weeks of training.