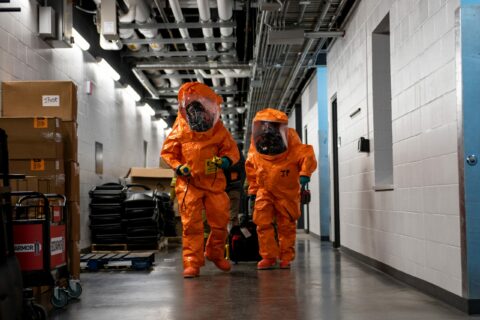 February 3, 2020 (ST. PAUL, Minnesota) — It’s no secret that the National Guard is always ready to respond to local and regional emergencies such as domestic emergencies and natural disasters. Soldiers and Airmen, ready to don their uniforms at a moment’s notice and pause their civilian lives to march toward any challenge before them.

Lesser seen, though, are teams that seamlessly blend in with their counterparts from other agencies. Teams like the 55th Civil Support Team based in St. Paul, Minnesota. With khaki cargo pants, navy blue polos and black tactical vests, the CST hardly looks like a traditional active guard/reserve (AGR) force.

“There are 57 teams in the country. Each team is comprised of 22 AGR, mixed with Army and Air,” said Lt. Col. Ryan Cochran, commander of the 55th CST. “It’s very specialized; each functional area has its own training requirements. That includes HAZMAT operations, technician certifications, and based on functional area or expertise, you have to go to anywhere from one to three years of continuing education.”

This continuing education is on top of the traditional military education that is required of troops. The courses taken by CST members are most often civilian-instructed courses.

On January 14 and 16, the 55th CST conducted training on its 12 Mission Essential Tasks under the evaluative eye of Army North.  The team had to walk through a scenario in which they encountered a threat during a routine sweep. From there, they worked through proper handling of the situation and methods of identifying that potential threat; whether it was explosive, chemical or radiological, then followed through with mitigation procedures. At the conclusion of the exercise, Army North had validated the 55th CST with full marks.

“Between Tuesday and Thursday there were really no comments for things to fix,” said Cochran. “It was really more sustains and ‘keep doing what you’re doing,’ and that was great to hear from an external evaluator like Army North.”

Tuesday’s training event took place at Minneapolis’ U.S. Bank Stadium, home of Minnesota’s National Football League team, the Vikings. On Thursday they were at Allianz Field, home of the state soccer team, Minnesota United. The 55th CST routinely operates at these locations prior to home games, checking for threats and ensuring public safety. Throughout the week, the team worked with the Minneapolis Police Department Bomb Squad, the local wing of the Federal Bureau of Investigation and the St. Paul Fire Department to develop and maintain inter-agency interoperability.

“I can’t even count on one hand how many inter-agency training events we have done like this one,” said Erik Wellman, a member of the 55th CST survey section. “Our team is very good about keeping a tight loop between all the agencies to make sure we produce the best possible protocols and plans of attack to not only keep us safe, but the people of Minnesota and surrounding states.”

The 22-person CST is broken into six main sections. The survey section is the primary force provider of the section. These are the people who conduct site characterization, reconnaissance and the initial sampling of substances. Surveyors have a vested interest in being technically proficient because they do all of the maintenance and calibration of their life-safety equipment like self-contained breathing apparatuses (SCBA) and closed-circuit breathing apparatuses (CCBA).

Two people make up the team’s decontamination section. Both of those individuals also have parallel duties in administration and logistics. The communications section also has two experts who go through three years of training to become validated in their skill set. In the operations section, there are two officers and one non-commissioned officer who help prepare for a worst-case scenario. The command section consists of the commander, deputy and first sergeant.

Extremely important to a CST is its medical/analytical section. CST medical teams often have a physician’s assistant in the role of medical officer. The 55th CST has Maj. “Doc” Allen Autrey, the only medical doctor in that position in the country. A medical NCO is also on the team, as well as an officer who is responsible for understanding local hospitals and support networks in case of dealing with mass casualty triage.

“The 55th CST is a great place for people who really want a new perspective on the military, and want to accept a good challenge in life,” Wellman shared. “This unit is very dynamic and you gain a huge amount of knowledge from the people that come from these different backgrounds and life experiences. To me, the knowledge and perspective I have gained is indispensable. This unit has definitely made me a better person. I have discovered weaknesses I didn’t even know I had and now built strengths and learned new skills that I now will be able to take with me the rest of my career.”