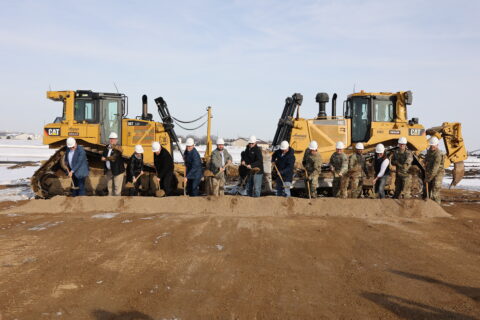 Minnesota State Senator Bill Weber of District 22 congratulated the Minnesota National Guard and the community of Luverne on the new facility during the event.

“Having a new National Guard armory built is an important element for any community,” Weber said. “The National Guard is that organization that communities rely on during so many difficult times. I want to congratulate them on the new construction they will have here in Luverne.”

Building, divesting, and consolidating facilities across the state is part of the larger plan by the Minnesota National Guard’s Readiness Center Transformation Master Plan or RCTMP to build new environmentally and economically sustainable training centers and to consolidate units into these facilities. According to the Minnesota National Guard’s 2014 annual report, the plan was developed after researching 64 armories across the state, examining variables like conditions, age, capacity for improvements, demographics, diversity, travel considerations for unit members, and future federal and state funding projects.

Initially, the Luverne armory project was not on the RCTMP, said Army Lt. Col. Troy Fink, the construction and facilities management officer for the Minnesota National Guard.  However, a private donor came forward with funding, and the city of Luverne identified land for the building site, and it became an Unspecified Minor Military Construction Project (UMMC). A UMMC is a construction project where the federal government does not provide the majority of the funding, he added.

“Luverne was accelerated because it was a full UMMC, not a [typical military construction project],” Fink said. “Funding came from the federal government, the state, and then the KAHR Foundation.”

The new $17.5 million facility will be 46,293 square feet, more than doubling the size of the current 20,890 square-foot armory in Luverne. The new building will feature assembly halls, work bays, storage areas, classrooms, a learning center, and a fitness center with locker rooms. Additionally, Fink said the new energy-efficient features and design would be certified as a Leadership in Energy Environmental Design-Silver facility by the U.S. Green Building Council.

“This new facility is going to bring a lot of capabilities to the organization that we just do not have right now,” said Battalion Commander, Army Lt. Col. Mark Gile. “The space alone gives us an opportunity to do more things as an entire battery versus being a detachment and a battery.”