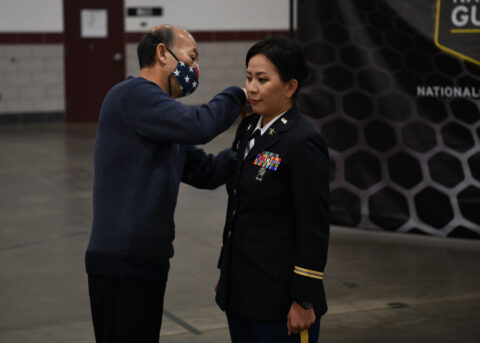 When a friend told her she could enlist in the National Guard without giving up her goal of being a full-time college student and completing a degree, she took a chance and joined.

“I was that kid always seeking what I thought was best for me, and self-improving,” Xiong said.

Little did she know that nearly 20 years after enlisting as a wheel mechanic, she would make history as the first female Hmong warrant officer in the Minnesota National Guard.

Hmong refugees began coming to Minnesota in 1975 from Laos, after years of war destroyed their homelands. Some of those refugees had already served the United States military, despite having never stepped foot on American soil.

As the Cold War intensified and communism spread throughout Indochina, the United States sought to recruit neutral locals to prevent the spread of communism.

“Hmong people were neutral locals who lived by the mountains of Laos and Vietnam. They were recruited by the CIA to fight the ‘Secret War’ against the North Vietnamese communists and Pathet Lao,” Xiong said.

She continued, “Their efforts were to disrupt the Ho Chi Minh Trail, provide intelligence, guard U.S. strategic installations, and rescue American Pilots. They were promised protection for their efforts.”

When the U.S. pulled out of Vietnam, Hmong people were left to fight the war alone and were subjected to genocide. Many of them fled to Thailand for refuge before relocating to the U.S.

Currently there are over 70,000 Hmong living in Minnesota, with the Twin Cities area having the largest concentration of Hmong in the United States.

“Today many Hmong decedents continue to serve the U.S. as proud American soldiers,” she said.

Warrant Officer Xiong serves as a Cyber Operations Technician with the Minnesota National Guard’s 177th Cyber Protection Team. She was promoted shortly after deploying with the unit in support of Task Force Echo V.

That deployment was part of an annual iteration of National Guard Soldiers from around the country whose mission was to engineer, install, operate, maintain, and defend critical network infrastructure and conduct cyberspace operations in support of U.S. Cyber Command and the Cyber National Mission Force.

Task Force Echo V is only Xiong’s most recent deployment. She also served in Kosovo from 2003-2004 during the Kosovo Force mission as a liaison team member, which helped lay the foundation of her career.

“I was able to sharpen my skillsets in my [mission occupational specialty] and experience the world from a Soldier’s perspective. The humanitarian experience helped shaped me as I was growing up in the Army,” Xiong said.

Aside from providing Kosovo children with coats and school supplies, she came up with the idea of a poster contests to help children understand the importance of not littering and drug abuse awareness.

“The excitement and smiles on their faces was the most memorable,” she said.

After returning home, Xiong continued sharpening that skillset by completing her undergraduate degree in management information systems at Metropolitan State University in Saint Paul before earning a master’s degree from the University of Saint Thomas in software engineering.

Attaining a degree was a goal of hers before she enlisted, and while having a master’s is nice, so are the skills she picked up serving in the National Guard.

“With my military leadership background, I was able to obtain a good career in information technology once I graduated.”

May is Asian American Pacific Islander Heritage Month and the Department of Defense is celebrating the contributions people of Asian or Pacific Islander descent have made to the nation. For Xiong, the observance is a time to reflect.

“It is a reminder to embrace and celebrate my Asian heritage, as well as, admiring diversity in our Nation.”

So, what else is there to say about a career in the Minnesota National Guard spanning two decades and multiple deployments?

“You can say that that young girl who came seeking strength reaped more than she could have ever imagined.”