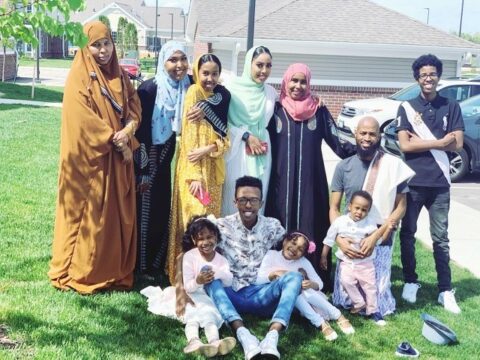 February 5, 2021 (DJIBOUTI) — Abdirahman Abdalla was around seven years old when he went to his mother’s first-cousin’s wedding in Rochester, Minnesota. It was a sunny July day, and around 30-40 close family and friends gathered in his cousin’s home to celebrate the union. Clad in whites and creams with reddish-orange stripes, men wore suits and women wore the dirac, a traditional dress for formal occasions. Abdalla remembers watching his mother and other women performing traditional dances while joyful guests offered excited gestures of encouragement. He also wore a suit, which annoyed him because his little cousins were around at the time playing Twister, and it’s difficult to play Twister in a suit. After the wedding, everyone went outside where there was cake, and Abdalla remembers the entire scene as a really great time. In fact, as an American born first-generation Somali-American, Somali weddings are one of his favorite cultural traditions.

“One of my favorite cultural traditions is Somali weddings because its so colorful and we know how to party,” he said. “As well I enjoy the Islamic holidays of Eid and Ramadan.”

Like many other young American-born citizens whose parents immigrated to the United States, Abdalla has found an identity in two distinct worlds. His parents were both born in Somalia –  his mother, Hadiyo, in Mogadishu and his father, Mohamud, in Kismayo. Both immigrated to the United States separately to pursue an education and other opportunities. His father first settled in Nebraska in 1989 and went to college part-time while working as a taxi driver. His mother found herself in Iowa in 1990, attending college part-time as well and working as a hotel housekeeper. The two eventually met in Iowa and were married. In 1994, they had Abdirahman in Spencer, Iowa. Eventually, they made their way to Rochester, where Abdalla grew up.

“I grew up mostly in Minnesota, my parents thought there were more opportunities there,” he said. “I visit Spencer, but I am more of a Minnesotan really.”

In 2016, Abdallah made the decision to become the first in his family to serve in the military by joining the Minnesota National Guard. He said his decision was driven by a desire to help others and serve.

“I wanted to join to help my community,” he said. “To understand what it means to be an American and be proud of it as well.”

Now, Spc. Abdirahman Abdalla is deployed to the Horn of Africa as an infantryman with Task Force Bayonet and Charlie Company, 2nd Battalion, 135th Infantry Battalion out of Winona, Minnesota.

Task Force Bayonet, an element comprised of National Guard Soldiers from Minnesota, Illinois and Iowa, is spread out across East Africa. The primary mission of the task force is to provide base security, port security and a Quick Reaction Force throughout the region in a joint working environment with other U.S and foreign service branches.

For Abdalla, serving has been a way for him to start a legacy for himself and also for him to fulfill the sacrifice that his parents made to come to the United States. Now, having the opportunity to serve in the region that is home to his ancestors has been a blessing, he said.

“It’s a great feeling and I’m so blessed to be here,” he said. “Learning about a new and yet similar culture is what makes the experience so great.”

For his parents, coming to the United States meant finding an opportunity to help their families back home in Somalia and to help their children work towards a better future. Initially, his mother was worried and could not understand why he joined, but after he explained to her his reasoning, she felt comforted.

“At first I was scared, worried and confused as an overprotective mother,” she said. “I thought I had his future lined up for him because of the sacrifice I made coming to the states. Now I see someone who is totally different, with a strong presence: a disciplined man in front of me.”

With her son now serving in the region where she came from, Hadiyo said she is happy for his opportunity to see where his family came from and how he can better understand the sacrifice his family made.

“When he told me the reason that he joined I completely understood right then and there,” she said. “I’m proud of him and happy for the good experience this deployment will give him.”

Having a cultural connection, the region has equipped Abdalla with skills that allow him to be a valuable resource to the task force and local nationals of the area in which he is serving. Fluent in Somali, Arabic and English, he has been able help bridge a communication gap between task force Soldiers, local citizens and contractors who interact regularly with U.S. forces. In fact, Abdalla, who has completed the language certification test for Arabic and is working to do so for his fluency in Somali while deployed, said being able to help facilitate communication here is what he enjoys most about his current deployment role.

“I enjoy being able to speak my native tongue with the locals,” he said. “And learning more about the culture here as well.”

Although he is ready to get back to Minnesota and experience his favorite aspects of American culture like meeting different people from around the world and, going to the Minnesota State Fair, Abdalla said he is happy to be here and working with those who call the Horn of Africa home. “It has been an honor to work alongside the locals,” he said. “It has also been great learning from my leaders and passing on that knowledge while sharing camaraderie.”