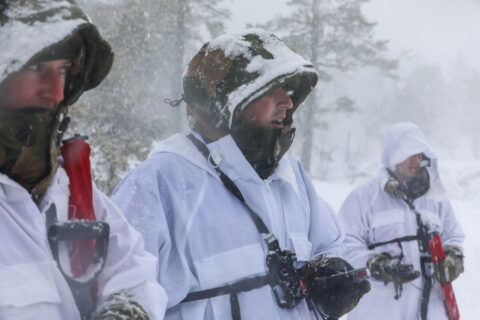 Airmen and Soldiers from the Minnesota National Guard and Norwegian Home Guard participated in the 49th annual U.S. – Norwegian Reciprocal Troop Exchange, known as NOREX, March 24 through April 7, 2022, continuing the U.S.’s longest-running military exchange partnership. The exchange, which began in 1974, promotes goodwill and sharpens military readiness between the NATO allies.

As the Soldiers and Airmen arrived in Norway on March 25, the members of the Norwegian Home Guard, known as the Heimevernet, fitted the Americans with Norwegian uniforms. The uniforms are made up of multiple layers, to combat the cold weather common during the harsh winters in the Norwegian countryside.

One of the major events of the exchange is a five-day field training exercise. The goal is to educate, train, and form bonds between Minnesota National Guard and Norwegian Home Guard troops. Prior to the start of the exercise, the Airmen and Soldiers learned how to boil water with their camp stoves and were fitted with cross-country skis before learning how to set up their tents. Due to the cold temperatures and snow in Norway, they also took a class on identifying cold-weather injuries and how to treat them.

“I am very excited to use all the skills the Norwegian Home Guard has taught us the last few days,” said Air Force Command Chief Master Sgt. Lisa Erikson, the Minnesota National Guard’s State Command Chief. “I am also excited to see the Soldiers and Airmen in the field and experience the arctic adventure.”

As the exercise began, Norwegian Home Guard members led the Minnesota National Guard Soldiers and Airmen in an introductory cross-country skiing class, helping them gain confidence before the hour-long trek to their campsite deep in the Trøndelag region woods.

When they arrived in an open area, the squads set up their tents as soft snow fell during the brisk March afternoon. The squads started their stoves inside the tents to warm up. They then began building snow walls around their tents to help block the wind before settling in for the night .

As the second day in the field began, Minnesota Guard members trained with the Norwegian Home Guard on a variety of winter survival skills.

One class highlighted the warning signs of surviving an avalanche, -and how to search for and rescue trapped victims.

A medical class trained the Soldiers and Airmen to evaluate an injured person, and how to build a sled that could be used to evacuate the patient from skis, trees, and rope.

A biathlon race brought the Soldiers and Airmen skiing along a route, practicing their cross-country skills, stopping at multiple spots to throw snowballs at targets.

Another class showed the Soldiers and Airmen how to build a fire and boil water, a skill that the Norwegian Rapid Reaction force must be able to do in under fifteen minutes. Norwegian 1st Sgt. Vidar Aune taught the class and provided the troops a warm treat, a reindeer broth he had prepared by boiling the leg of a reindeer he hunted the previous fall. He explained that the training provides the Guard members with the vital skills they will need to survive a cold winter night.

“If you hear about it,you hardly remember. If you see a picture of it, you can probably picture it. But if you do it, you’ll remember,” said Aune. “You need to do it and experience, it not just see it.”

Aune, who has helped with the training for six years, said it helps him feel connected to the family members he has, coincidentally in Hendrix, Minnesota.

On the morning of day three, the Minnesota National Guard members packed their tents, attempted to make their campsite appear as if they were never there, and began skiing toward the next campsite. On the way, they experienced skijoring, skiing while being pulled by a vehicle. While it gave their legs a break, it tested their upper body strength as they held the tow rope tightly. They followed this experience up with a Norwegian polar plunge into a small icy cold lake.

After warming up, they continued the journey to their next camp site, again setting up their tents, building snow walls, and boiling water to sip and help them stay warm. The night ended with building benches in the snow for an outdoor film showing of “The 12th Man,” which is based on the true story of a Norwegian Soldier who escaped the Nazis during World War II.

On the fourth day of the exercise, participants dug out snow caves that they would be sleeping in that night, taking shelter in the mountains’ large snowdrifts. The caves block the wind and blowing snow and stay warmer than the outside temperatures.

“It was the best night of sleep I had during the whole [exercise],” said Air Force Capt. Heather Goff. “I was surprisingly warm all night. It was really enjoyable to sleep in something that we had spent all day building.”

On day five, the Soldiers and Airmen packed up their equipment, skied back down the mountain, completing the exercise with new memories, skills, and experience gained from their training with the Norwegian Home Guard.

“Our Soldiers have such a large array of experiences and strengths. It was great to see them come together,” said Air Force 1st Lt. Gavriel DePrenger-Gottfried. “They braved the cold, had fun, and above all, got the mission done.”