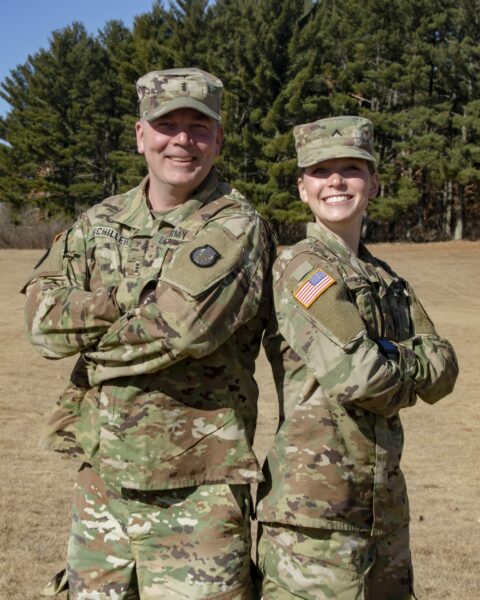 April 5, 2021 (Camp Ripley, Minnesota) — For one family, serving in the Minnesota National Guard is a tradition.
Chief Warrant Officer Three Dana Schiller is nearing the end of his 30-year career as his 18-year-old
daughter, Pvt. Sara Schiller, begins her own journey.

The Schillers’ both express pride in serving and an appreciation for life and people.

“I’ve met a lot of people with different backgrounds, beliefs, and traditions,” said Dana. “The military is one of the most diverse organizations out there and we all share the same goal to serve.”

Throughout his career, Dana has deployed three times. Twice he went to Kosovo and once to Kuwait. Each time was increasingly more difficult as his small family grew. His first deployment in 2003-2004, he and his wife, Deb, had two children. But by the third deployment, they had four young girls.

“Being a military kid was hard at times, but we got a lot of reassurance and support from others,” said Sara. “The last deployment was the hardest because we understood what it meant, before that all I knew was that my dad was being super awesome.”

Currently Dana is serving as the Property Book Officer for 1st Armored Brigade Combat Team, 34th Infantry Division stationed out of Rosemount, MN. He has a Bachelor of Science in Business Administration. When not working he enjoys fishing, hunting, boating and spending time with family at the cabin.

After returning home, Dana was given the option to work full time at Camp Ripley or in the cities. Without skipping a beat, he chose Camp Ripley.

“We really liked the feel of the Brainerd Lakes area, so Camp Ripley became home to us,” said Dana. “It’s a community; if it wasn’t for the people it would just be buildings and trees.”

Sara feels this same sense of community within her own circle in the Minnesota National Guard.

“I like meeting all new people and having another family,” said Sara. “As for me, I feel like Camp Ripley is a place of opportunity with many resources for us.”

Sara enlisted on May 7, 2020 as a medic. She decided to enlist through the split option program which allows students to tackle Basic Training one summer and Advanced Individual Training the next.

Growing up as a military kid, Sara feels like she has a slight advantage over other new soldiers. She learned to be mentally tough and how to adapt to change as a kid. She describes her and her siblings as being more disciplined than most people their age.

Her dad is proud to see her follow in his footsteps.

“He would always mention, of all my four girls, someone’s got to join the military,” said Sara. “I
figured I would step up on that.”

Although Sara has already started her military career, she has a plan set in place. She wants to go to school for nursing and specialize in mental health. Towards the end of her schooling she plans on becoming an officer, earning her commission through Reserve Officers’ Training Corps.

“I want to become an officer and then do a couple years of active duty,” said Sara. “I want to learn as much as I can while I’m still young.”

The father and daughter duo share a unique experience because they can serve together. The Schiller family story of selfless service empowers our organization to remain always ready.