For the Last Time 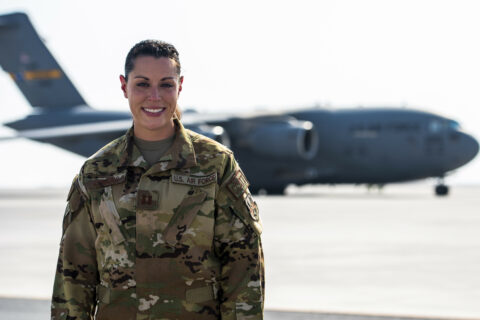 Assigned to the 379th Air Expeditionary Wing at Al Udeid Air Base, Qatar, she watched the Taliban move across Afghanistan on the news

“On August 16th, the whole base was told that things are going to happen,” said Lunning. “We didn’t know what it meant but were given an idea what our roles would be.”

The CCATT is designed to care for critically injured or ill patients that require continuous monitoring, stabilization or complex treatment in transit to a medical facility onboard aircraft like the C-130 Hercules and C-17 Globemaster III. Comprised of a physician, nurse and respiratory therapist, this capability allows service members to be transported from point of injury to a stateside hospital in less than three days.

Due to their expertise, CCATTs can also set up aid stations on the ground. That is exactly what happened once Afghans began arriving at Al Udeid.

“In that first week, medical help was needed in the hangar,” she said. “The Afghans have been on a long journey to get here…[we focused on] treating what we could.”

“After a few days, CCATT [teams] started flying into Kabul Airport,” said Lunning. “We didn’t know what to expect. On the flights to Kabul, we were wearing protective helmets and vests. The intelligence brief was concerning, and you could feel that everyone was on alert.”

Her team had to be prepared to accept a variety of patients ranging from orphans to trauma, a far cry from the routine she was accustomed to only days earlier.

The days were long and fast-paced. A Norwegian Hospital was set up at the Kabul Airport where a group of Airmen were assigned to assist with patient movement to the C-17. Lunning and her team quickly developed a relationship with the Norwegian medical professionals, talking through equipment differences to create trust and rapport. She had no way of knowing how critical these relationships would be in the days to come.

On August 26, after a long day of transporting patients, Lunning was drifting off to sleep when her team doctor called, “we need to be [at the building] in 20 minutes. Get dressed and go.”

In the whirlwind of getting out the door, she replied to concerned family member text messages with, “I have no idea what is going on. I love you! I will text you when I can.” With that, she found herself back on the C-17 en route to Kabul, facing the unknown. The Taliban had taken control and the ISIS-K presence was increasing. A lot could go wrong.

“When we landed, it was a different feeling,” she said. “The engines on the plane were still going. The relationships that we built in the days ahead of time [took hold]. We walked into the hospital and they knew who we were. One of them grabbed me by the arm and said, ‘this is the one you are going to take first.’ They handed us the reports and medications, and we started to switch their equipment out with ours. We got everyone to Germany safely.”

As history unfolded before her eyes, her leadership made it a point to remind the team to take notes and journal about their experiences.

“What I remember the most was how everyone came together and the teamwork,” recalls Lunning. “We all worked towards a goal and wanted to do the right thing.”

Lunning was on the last convoy of C-17s to leave Afghanistan. In just two weeks of her 19 years of service, she played a critical part in the largest U.S. humanitarian airlift in history. For the first time in her career, the U.S. did not have a presence in Afghanistan – a realization that dawned on her as they left Afghan air space for the last time.