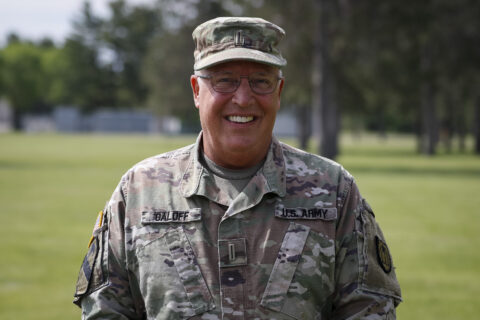 Galoff will retire this summer with more than 42 years of service. He began his career in 1980 with the Wisconsin National Guard’s 724th Engineer Battalion as a combat engineer and heavy equipment operator before moving to Colorado.

“When I left Wisconsin, we were in a bad recession,” said Galoff. “I decided one night that I would come [to Colorado]. I loaded up my toolbox and clothes. I had like two or three hundred bucks, and I headed to Denver.”

In Colorado, he served as a power generation equipment repairer with the 3650th Maintenance Company. He also met his wife Brenda, who happened to be from Blaine, Minnesota. After 18 years of service and several promotions, he had become Sgt. 1st Class Thomas Galoff.

“Colorado is a much smaller organization than what Minnesota is,” said Galoff. “At that time, they were looking at doing cuts. That’s when I decided to go warrant.”

In 1998, he traveled to Fort Rucker, Alabama, to attend warrant officer candidate school. After graduating and returning to Colorado as an automotive maintenance warrant officer, Galoff and his wife began looking to move closer to their families. They settled on the Twin Cities metro area as the halfway point from his family in Phillips and hers in Detroit Lakes.

In 2000, when he began working at the field maintenance shop in New Brighton, he had to take a voluntary reduction back to Sgt. 1st Class so he wouldn’t out-rank his supervisor. Here in Minnesota, he would serve another 20 years and eventually join the warrant officer corps again.

In 2004, Galoff deployed with Delta Company 216th Air Defense Artillery under the Washington National Guard’s 81st Brigade to Baghdad, Iraq. During the deployment preparations, the 81st Brigade converted from a mechanized unit to an infantry unit.

Following their return from deployment in 2005, the 216th was disbanded.  Galoff then went on to serve with 34th Divisional Support Command, known as DISCOM, from 2006 to 2008.

During his long career, Galoff has had the opportunity to impact many service members.

“I am proud of him,” said retired Army Col. (Brevet) Geraldine Longfellow. “I felt like he was committed to doing his very best work and continued to develop his expertise. He even took my nephew, Warrant Officer 1 Anton Johnson, under his wing when he was a specialist.”

Around the same time Galoff transferred to Minnesota he met, then, Spc. Matthew Hanggi, a production controller.

“Production controllers and mechanics sometimes butt heads,” Hanggi said with a laugh. “Because they think they know what they’re doing, but they don’t.”

When Galoff took over the supervisor role at the shop, Hanggi had decided to become a mechanic.

“We were up at Camp Ripley to get a brigade ready to go out the door,” said Galoff. “I remember one day; Matt had said something to me. I was like, ‘you know what? I am the one that runs the shop, and if you want [have more of a say], then maybe you should go to warrant school.’ After that, he went to warrant school.”

According to Hanggi, Galoff never said something if he didn’t mean it.

“He gave me the push that I needed,” said Hanggi. “There’s never a perfect time.”

Hanggi also believes that Galoff has been a great mentor throughout his career. Galoff’s dedication to always working hard and doing the right thing has inspired Hanggi to follow in his footsteps.

“I try to emulate what Tom does,” said Hanggi. “He has always been like the older brother to me on the technician side and the personal side. He’s always been there to lend an ear and he’s always been my boss, but he’s also been my friend.”

Hanggi explained that it might be difficult to be friends with someone you’re in charge of, but regardless, he has always appreciated the friendship and mentorship between them.

“He’s one that keeps me on my toes,” said Galoff. “I taught people what I knew. But it’s really rewarding when they take that, understand it, and then go above and beyond to make it even better.”