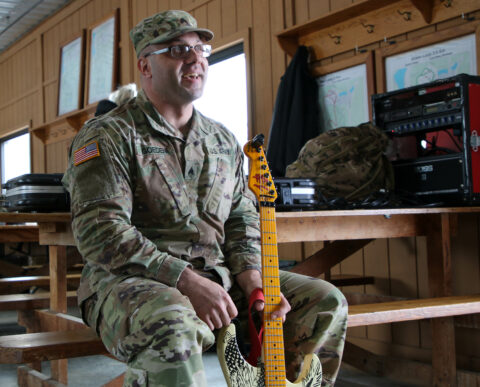 Minnesota National Guard Army Sgt. Benjamin Goeden started playing the guitar at the young age of 14. However, he was inspired well before then by the iconic hair bands of the 80s.

He can recall his first itch to strum a guitar as he watched the revolution of the rock’n’roll scene unfold into what we now call classic rock.

His babysitter brought a VHS tape of the Aerosmith concert on their pump tour with Poison as the opening band. “Seeing Poison’s guitarist C.C. Deville playing all his crazy licks and whammy bar tricks. I was blown away,” says Goeden.  “Also, seeing guitarist Joe Perry for Aerosmith heavily influenced my desire to play guitar. After watching that concert, I knew that I wanted to be a guitarist.”

From that point forward, Goeden would continually urge his mom, Lori Lynn Wiste, that a guitar would better his existence. She would not only give in to his demands, but she would also fully support his endeavors.

Joining the Minnesota National Guard’s 34th Infantry Division Red Bull Band was a positive turning point for Goeden, as it provided friendships and opportunities that he never thought possible for himself.

“From the day I passed the audition for the band, there was a feeling of pride. It proved that I could do this as a guitarist, and it’s real. I’m not just some basement bedroom player that never gets out there to play as a pro,” said Goeden.

As an artist herself, Wiste sees the vital importance of being able to follow your dreams and all the hard work that goes into achieving your goals. Wiste would ensure that her son could harness his love for music by fueling his artistic interests.

She would do costume design and sewing. She even designed custom guitars for him. Her son’s passion enabled her love of art, and the pride she felt for her son reflects in these creations.

He plays in a professional cover band group that plays a variety of different genres with many different personalities. “For pop and dance music, we perform as Candyshop. For 80s pop, rock, and hair metal, we perform as Tigerpants and dress up in 80s workout clothes. We perform as the Whiskey Devils for country music and dress in our rockin’ country clothes.”