ANOKA, Minn. (Oct. 4, 2017) – The Minnesota National Guard lost one of its most historically significant units when the 151st Artillery’s E Battery, (Target Acquisition) cased its colors in a ceremony at the Anoka High School Aug. 19, 2017.

The Target Acquisition Battery (ETAB), 151st Field Artillery is one of the oldest and most decorated units in the Minnesota National Guard and the 34th Infantry Division. “Both Minnesota and the Division lose the proud lineage that goes back to Civil War days, through WW1 and WW2, and had a significant amount of battle streamers,” said 151st Field Artillery Battalion Commander, Lt. Col. Patrick Cornwell.

The 151st Field Artillery draws its lineage from the 1st Regiment, Minnesota Heavy Artillery of 1864 which fought two major campaigns in Tennessee during the Civil War.

In 1917, Minnesota artillery units combined to form the 151st Field Artillery and served in France under the 42nd Rainbow Infantry Division in six campaigns, earning Minnesota’s only WW1 battle streamers.

In WWII, the 151FA participated in seven campaigns and its Echo Battery earned an additional five campaign streamers for combat in Normandy, Northern France, the Rhineland, Ardenns-Alsace, and Central Europe. They were also honored with the Belgian Fourragere for their action at Mons and Eupen-Malmedy.

In 1951, the battalion was activated for the Korean War and served at Fort Rucker Alabama under the 47th Viking Infantry Division to train deploying soldiers. Many of these Viking artillerymen deployed individually to fight in Korea.

In support of the Global War on Terror, Echo Battery deployed numerous times, earning the coveted Meritorious Unit Citation for deployments to Iraq in 2004-05 and 2005-06. The battery has also deployed in Minnesota and neighboring states in times of emergency for more than a century and a half.

How does the loss of their Target Acquisition Battery impact the 151st Field Artillery? “Most importantly the loss of the people. It’s the people that make the 151 special,” said Cornwell. “We also lose capability. No longer will I be able to internally source radar coverage for observing indirect fire, which important to a battalion commander.

“Significantly, the battalion will no longer have a footprint in the Anoka community who were special to us. They all supported us, from the high school to the police department, the county, the American Legion, the VFW, the Yellow Ribbon Network, the Family Readiness Group, and many others. The great people of Anoka rallied around to honor Echo Battery, the National Guard, and the armed forces.”

The unit’s final “Casing of the Colors” ceremony was followed by a family day lunch with activities for the kids at the Anoka Armory. Attending were the final battery commander, Chief Warrant Officer 2 Andrew M. Tepfer and Battery 1st Sgt. Ronald W. Hansen. Most Echo Battery Soldiers have since transferred to other Minnesota National Guard units. The Anoka Armory will remain active as the home of an element of the 125th Field Artillery. 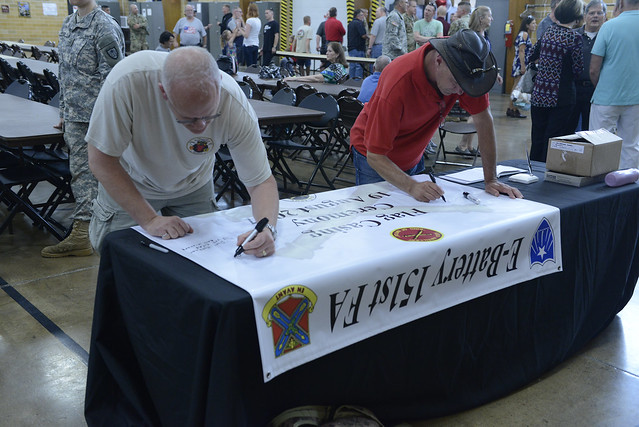