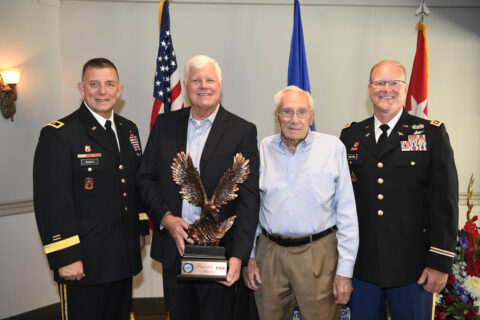 August 18, 2021 (WILLMAR, Minnesota) – The Department of Defense recently named Minnesota’s Marcus Construction a recipient of the 2021 Secretary of Defense Employer Support Freedom Award. On Wednesday August 18, 2021, the company celebrated that prestigious recognition at an event in Willmar.

The Employer Support Freedom Award is the highest U.S. government honor employers who provide exceptional support to National Guard and Reserve employees can receive. Any Guard member or Reservist can nominate an employer, spouses are eligible to submit nominations as well.

The Employer Support of the Guard and Reserve, or ESGR, reviewed 3,382 nominations before selecting 15 companies for 2021.

Retired Air Force Colonel Tom Simonet, who serves as the chair of Minnesota Committee of ESGR, spoke to the versatility of Guard and Reserve Servicemembers.

“These Citizen-Soldiers are our neighbors, friends and family. They are constantly being called to protect our freedoms,” said Simonet. “No longer is the citizen Soldier, Marine, Sailor, Airmen or Coast Guard doing the simple two days a month, two weeks a year.”

Marcus Construction was nominated for the award by Army Lt. Col. Daniel O’Meara, a safety compliance officer with the company. O’Meara recently returned from a deployed to the Middle East where he served as the commander of the Minnesota National Guard’s 834th Aviation Support Battalion.

Simonet noted the company’s commitment to their employee, “The road Marcus Construction traveled showcased the extent and willingness of an organization to support their Guard member Lt. Col. Dan O’Meara.”

Marcus Construction’s commitment to O’Meara only got stronger while he was deployed.

“Fellow employees and senior company leaders contacted both my wife and I on a regular basis to offer help with house maintenance, yard work, or general emotional support,” he said.

The COVID-19 pandemic in the spring of 2020 placed another level of stress on the O’Meara family. Again his friends at Marcus recognized it and sprang into action. In April of 2020 his co-worker Sara Goebel stopped by the O’Meara residence with gifts for the kids and to lend emotional support for his wife.

“The reason for it all, it was my birthday and Ross and Sara wanted my family to have a fun day despite the stress associated with my absence or the pandemic.”

O’Meara recognized that a lot would be made about him during the Freedom Award selection process and he kept things in perspective.

“I have received a lot of attention throughout the award process, yet this award is not about me, I simply just put it all in an email and hit send,” said O’Meara. “It is really about Marcus Construction.”