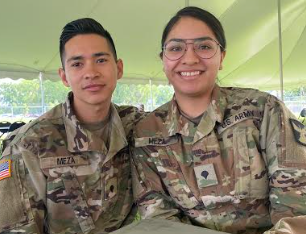 June 25, 2020 (CAMP RIPLEY, Minnesota) — Spc. Isaiah Meza is a Soldier, brother and husband. He is a light-wheeled vehicle mechanic with the 204th Medical Company Area Support Group, as well as a full-time federal technician at Camp Ripley, Minnesota, who is preparing to attend a National Training Center rotation with the 1/34th Armored Brigade Combat Team in July. He also happens to be transgender.

Meza is one of many LGBTQ Soldiers and Airmen serving in the Minnesota National Guard today.

Growing up in a Hispanic family, everything was very gender-specific, similar to the military, Meza said. He fit into the feminine roles that were assigned to him until he was old enough to speak up for himself. Eventually, he decided to be who he was: a man.

Once Meza had the opportunity to serve as himself in the military, he took it.

On June 30, 2016, then Secretary of Defense Ash Carter announced that transgender individuals would be able to serve openly in the U.S. armed forces after a comprehensive process that included leadership of the Armed Forces, medical and personnel experts across the Department of Defense, transgender service members, outside medical experts, advocacy groups and the RAND Corporation. They found that it was in the military’s best interest to recruit and retain the best troops, regardless of gender identity. Service members were then able to access all medically-necessary health care and officially change their gender marker in personnel systems. In January 2018, transgender recruits were able to join the military according to their gender identity.

Meza decided to put his transition on hold after the announcement and enlisted into the Minnesota National Guard on April 26, 2017. On July 26, President Donald J. Trump tweeted “the United States Government will not accept or allow Transgender individuals to serve in any capacity in the U.S. Military.” This tweet did not immediately change the official policy, but set into motion the writing of a new policy to disqualify service members who experience gender dysphoria from serving in the U.S. military. According to the American Psychiatric Association, gender dysphoria refers to an individual’s discontent with their assigned gender.

Meza continued onto his Basic Combat Training and Advanced Individual Training. When he got home to Minnesota, he didn’t know what to expect from his unit, the 204th MCAS.

“As soon as I got done with AIT, they rushed all of my stuff to get me grandfathered in,” Meza said referring to the unit completing his packet to officially change his gender marker from female to male in the DoD personnel system. “I personally feel comfortable and supported.”

Several lawsuits against the new policy were filed, and the Supreme Court of the United States has allowed the new policy to be implemented while the lawsuits are pending. On April 12, 2019, any service member who had a documented diagnosis of gender dysphoria, like Meza, were grandfathered in under the 2016 policy. Transgender service members without the diagnosis must continue to serve in their assigned gender and are not permitted to medically transition.

“Honestly, I just feel bad for the people that are still serving that did not get grandfathered in,” Meza said. “It takes a toll on people with everything being so gender-specific.”

Meza wants to be seen for who he is as a person and Soldier first. His unit respects his decision to keep his gender identity on a need to know basis.

“It’s not the first thing that I say,” Meza said. “I try to get them to know me as a person before I tell them.”

He’s grateful for the support of his unit and the Minnesota National Guard. One thing that he wants others to know is that he and other transgender service members are no different than anyone else. They are here to serve and accomplish the mission.

Lesbian, gay and bisexual service members have been allowed to openly serve in the U.S. military since September 2011. Prior to that, the “Don’t ask, don’t tell” policy was in place since 1993. In 2013, spousal and family benefits were extended to service members in same-sex marriages, two years after the repeal of DADT.

Until 2016, transgender service members could still not serve openly. A new policy was crafted that ended the ban on transgender service in the U.S. military through a comprehensive process that included leadership of the Armed Forces, medical and personnel experts across the Depart of Defense, transgender service members, outside medical experts, advocacy groups and the RAND Corporation. They found that it was in the military’s best interest to recruit and retain the best troops, regardless of gender identity. Service members were then able to access all medically-necessary health care and officially change their gender marker in personnel systems. In January 2018, transgender recruits were able to join the military according to their gender identity.