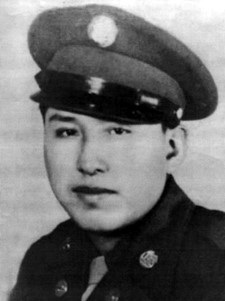 Near midnight on a small airport tarmac in Bismarck, North Dakota, family, and tribal drums greeted the return of the remains of U.S. Army Pfc. Melvin Little Bear, a Korean War veteran who had been missing in action since February 13, 1951. Little Bear later died while in captivity at POW Camp 1 in Chansong, North Korea on July 21, 1951. Seventy-one years later, after his remains were recovered and identified, members of the Minnesota National Guard had the honor of supporting his dignified transfer home on Sept. 26, 2022.

“Minnesota’s Military Funeral Honors team is known nationally for setting the standard for the rest of the country to follow,” said retired Army Maj. Chris Van Hofwegen, the former Military Funeral Honors (MFH) coordinator for Minnesota. “The team goes above and beyond to make sure the families of our fallen are taken care of, as was the case for Pfc. Little Bear can attest to.”

When word first came to the team about Little Bear’s dignified transfer, the request was only for planeside honors – the ceremonial removal of a casket from an airplane by seven members of the team. However, when the team learned that the family of Little Bear would have to travel over 15-hours round trip from their homes in South Dakota to the Minneapolis-St. Paul International Airport, the MFH team began coordination with the Minnesota National Guard’s 34th Expeditionary Combat Aviation Brigade to arrange air transport for the fallen Soldier.

“It is an honor for our crews to support any mission that returns service members to their families,” said U.S. Army Col. Greg Fix, the Minnesota National Guard’s state aviation officer. “We wanted to make the transition of Pvt. 1st Class Little Bear’s return from Korea back to his home in South Dakota as smooth as possible and we look forward to more missions like this to honor these service members from past wars and conflicts.”

In addition to arranging for expedited transport via military flight, the Minnesota MFH team also coordinated with the Minnesota National Guard’s Native American Heritage Council to provide a Soldier of shared heritage to escort Little Bear during the journey home. The council, one of eight in the organization, puts special emphasis on cultural diversity across the state’s National Guard.

Sgt. 1st Class Jennifer Stiffarm, a culinary management noncommissioned officer with the 34th Division Artillery (DIVARTY) Brigade volunteered to be the escort for Little Bear. This mission left a lasting impact on her as her family has ties to the Fort Belknap Indian Reservation in Montana which is the homeland of the Assiniboine (Nakoda) and Gros Ventre (Aaniiih) Tribes.

“It was incredible bringing Pvt. 1st Class Little Bear home,” said Stiffarm. “As I move forward in my military career, I will not stop telling his story. His sacrifices deserve to be told and honored. Without a doubt, this is the greatest achievement I will ever have in the military.”

Stiffarm was the first person to greet the family on the tarmac and she presented them with a gift in an effort to alleviate their anxiety from the ceremony. She describes the impact this dignified transfer had on the family and community members that night.

“As I went to shake each of their hands…they were beyond grateful,” said Stiffarm. “[The dignified transfer] meant more than any of us will ever understand. They were excited to have Little Bear home but also grieving the pain he endured while a POW.”

The level of coordination and dedication that the Minnesota MFH team took on shows how important they find their work.

“The actions of the [Military Funeral Honors] team is what each and every veteran and their families deserves for putting their lives on hold for the rest of us,” said Van Hofwegen. “In my opinion, providing funeral honors for fallen service members is the most important mission of the Department of Defense.”

Since its inception in 2006, the Minnesota MFH team has participated in more than 55,000 funerals for veterans of all branches throughout the state of Minnesota. This year, the 16 full-time staff members who serve in four locations throughout the state have conducted 2,914 funerals and seven planeside honors so far – an average year Van Hofwegen reports.

“The team is very dedicated,” said Van Hofwegen. “They will go wherever and whenever to provide honors to the families of our fallen.”

From a state-level organization’s perspective, placing the emphasis on taking care of people made this mission a top priority.

“It was important to take this extra care because Native American veterans have always gone above and beyond for our nation,” said U.S. Army Col. Eduardo A. Suárez, director of strategic communications for the Minnesota National Guard. “We are proud and grateful for the diversity of our force and the contributions our Native American service members make every day.”

November is nationally recognized as Native American Heritage month in addition to being the designated month to honor Military Families and Veterans. Little Bear’s story illustrates from both the past and present the importance of honoring the service, sacrifice, and culture of our fallen veterans.