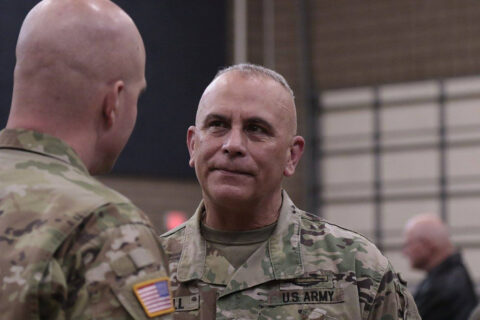 Headquartered in Minnesota, the division has been commanded almost-exclusively by members of the Minnesota National Guard since 1968.

“Typically there’s been very few people who have been allowed to command the 34th Infantry Division that didn’t come from the state of Minnesota,” Corell said.

Though Corell can’t claim to be a Minnesota Soldier, he is a Red Bull Soldier through and through.

The only time he took the Red Bull off was to serve a one-year tour as the deputy commander for NATO Multinational Division-Southeast in Bucharest, Romania.

The making of a division commander

Corell, originally from Strawberry Point, Iowa, joined the Iowa National Guard in 1986 for a $5,000 cash bonus. He and his wife Beth had a growing family to support.

“I needed extra money because I had three kids and they were hungry all the time,” Corell laughed.

At 24, Corell was a little older than many of the recruits joining right out of high school. “When I went to [basic training], they called me grandpa,” Corell said.Corell was assigned to Company B, 1st Battalion, 133rd Infantry, 2nd Infantry Brigade Combat Team in Oelwein, Iowa as a new private. His commander at the time encouraged him to go to Officer Candidate School.”I wasn’t sure what that was, but I went,” Corell said.

He returned to Company B as a second lieutenant and started down a long path of leadership assignments that took him through every stage of command in the Iowa National Guard’s 2nd Infantry Brigade Combat Team.

Orr and Corell served as platoon leaders in separate companies in 1-133rd Infantry at the same time. Later, as they moved through their careers, Corell was often one of Orr’s trusted subordinates.

“I was a little bit ahead of Corell in the career management program as we look at career progression,” Orr said. “I was always in a higher level of command responsible for the organizations he was a part of.”

Orr said Corell was a part-time Soldier for the majority of his career. Corell owned a business, did volunteer work in his community, raised a family, helped on the farm, and served the Iowa National Guard one weekend a month and, typically, for a few weeks in the summer.

“He is the epitome of what I would say is a traditional Guardsman,” Orr said.

Despite his traditional status, Corell’s service has been rather non-traditional. He has served on five overseas deployments – one of them, coined The Long Deployment by Iowa Red Bulls, lasted nearly two years.

“He’s deployed at every level,” Orr said. “He probably has more deployments and deployment time than any other officer in his equivalent position in the country.”

His experience commanding, and deploying, at every level on his way to division command, makes him uniquely qualified for the job, according to Orr.

“In addition to his personal skill sets [and] his dedication, his overall military background makes him the right person for the position,” Orr said. 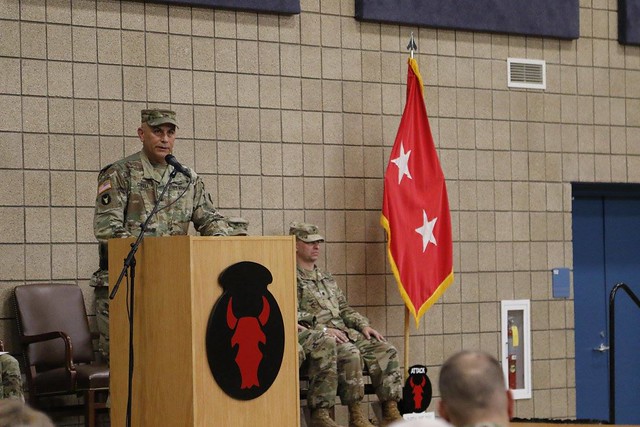 In July 2017, Corell was named Orr’s deputy adjutant general of the Iowa Army National Guard, a position he will continue to hold in the near term while serving as the division commander for the 34th Infantry Division. This poses a unique and challenging situation reminiscent of his years as a traditional drilling Soldier – holding one job during the week and another on drill weekends.

“My mind works logically, and it’s about what’s the priority of the time,” Corell said, sure that he’s ready to balance his two roles.

For the first time in recent history, the position for the 34th Infantry Division commander will be an Iowa National Guard billet, meaning Corell will not have to transfer to the Minnesota National Guard – an opportunity that will keep him connected with the Soldiers he’s worked with through the years.

“The thing I appreciate about his leadership style is that he absolutely demands and allows subordinates to do their job,” Arnold said.

Arnold first served as a squad leader under Corell when he commanded Company B, 1-133rd Infantry in 1996. Later, Arnold would be Corell’s command sergeant major at both the battalion and brigade levels.

In 2005, Corell and Arnold took the 1st Battalion, 133rd Infantry to Iraq for what was sure to be a routine combat deployment for two seasoned infantrymen. Almost two years later, the battalion returned.

“We started getting inquiries from families back home about, ‘Hey, we hear you’re getting extended,’ and at that time, we didn’t know it,” Corell remembered.

The rumors were true and in early 2007, Corell received news his battalion was staying in Iraq for up to an additional 180 days.

“We were outside the wire every day and there was an enemy out there that was aggressively trying to do as much damage to our formation as they could,” Corell said. “So we had to keep our heads screwed on straight.”

Arnold said Corell made his expectations clear to the battalion’s leadership.

“He kept his leadership team together and made sure everyone knew that the Soldiers in the unit were going to be taking their clues off our reaction,” Arnold said.

And then, Arnold said, the 1-133rd Infantry went back to business as usual.

A decade later, Iowa Red Bulls still refer to the time spanning 2005-2007 as The Long Deployment. Though there’s little fanfare about the length of their stay in Iraq, because, perhaps, that’s the Red Bull way.

In WWII, the 34th Infantry Division – whose motto is “Attack! Attack! Attack!” – spent more days in consecutive combat in the European Theater than any other division in the U.S. military. In Corell’s office, there’s a photo of him sitting in front of a Red Bull emblem with a WWII veteran.

“When I was a kid, my dad was a Marine Corps vet and he would take me to the Legion Hall…and that’s where I first saw the Red Bull,” Corell said. “It was on WWII veterans that were from my hometown. The respect that the other members of those associations gave to those WWII vets was noticeable to me, even as a kid.”

“We have tremendous history and lineage with the 34th [Infantry Division],” Orr said, “so this is a big deal for an Iowan to command the 34th Division. This is history.”

Orr also pointed to the service Red Bull Soldiers gave in WWII and to the impact Red Bull deployments have had on small Midwestern towns as they’ve sent their sons and daughters to war.

Moving the ball down the field

“I can’t think of any time that I thought to myself, ‘God, I wish I hadn’t done this,'” Corell said, looking back on a career full of hard work and nights away from his wife Beth and his three sons.

As a father to three young boys in the beginning, Corell was aware he was setting an example.

“I didn’t overtly ask them to join,” Corell laughed, remembering teaching his sons to rappel from trees in the backyard and hosting a weekly Meals-Ready-to-Eat night.

All three of Corell’s sons serve as Soldiers in the Iowa National Guard and all three wear the 34th Infantry Division’s Red Bull patch.

With a career spanning three decades, Corell said he’s not ready to quit just yet.

“I can look back and say I’ve had a great career,” Corell said. “But I still feel I have something left to offer – in this position here and as the division commander of the 34th Infantry Division. I’m excited about moving the ball down the field in the time that I have left here.”

As Corell assumes his next level of command, one thing is certain: his pride in the Red Bull and the Midwest Soldiers who wear the patch is strong.