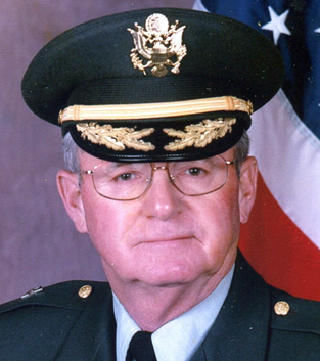 November 12, 2020 (CAMP RIPLEY, Minnesota) — Service to the community, state and country runs deep in the LeBlanc family. So far, three generations of LeBlanc’s have worked at Camp Ripley fulltime, totaling over 70 years of service to this community.

Gary and his brothers, Gale and Gregg, served together in the 747th Maintenance Battalion in Long Prairie, MN. Gary later served as a personnel support officer at the State Headquarters before becoming the Garrison Commander at Camp Ripley in 1986. In 1990 he became the state’s Assistant Adjutant General.

“We were all proud to serve our country, it shaped our [Gary, Gale and Gregg’s] lives,” said Gregg.

As the post commander, Gary was instrumental in the establishment of the Combined Support Maintenance Shop, now Consolidated Maintenance Activity (CMA). He also helped build the framework for Camp Ripley’s interagency partnerships and created the Environmental Quality Control Committee which has led to the award-winning program of environmental stewardship here.

Gary’s service has been an inspiration to his family and other soldiers alike. Gale’s favorite part of serving came from his time as a first sergeant.

“You could impact the soldiers at that level a lot,” said Gale. The one thing I would say for sure is it was the best move I ever made in my life.

Gale retired as a Sergeant Major in 2005 and recalls being very proud of his past and his brothers. He described Gary as being a down to earth General; one who remembered his Little Falls roots.

These days, there are three LeBlanc’s actively serving the Camp Ripley community; Jason, Clint and Andrew. Both Clint and Jason work at MATES while Andrew serves as a firefighter here.

Clint and Jason’s father, Kenneth LeBlanc, also worked as a mechanic. Their grandfather, Bill Walsh, worked at Roads and Grounds. Being part of a military family for Jason, has taught him to be more respectful of those who serve. Being a Soldier who has deployed eight times, his biggest tip for families is to be prepared.

“Be prepared for it mentally and financially, when in doubt ask,” said Jason. “People are so afraid to ask and to be wrong, but the help is there.”

Clint has worked fulltime for roughly 15 years and thinks of Camp Ripley as not only his place of work but also a second home.

Although, Jason and Clint are distantly related to Andrew, Andrew feels the same connection and pride toward his family’s history.

For Andrew, growing up in a military family pushed him to be a better person and to hold a high respect for others. Andrew started working at Camp Ripley in 2010 when he was one of the first hires for the Fire Department here.

He has seen the Fire Department grow to the capacity it is today. For him, Camp Ripley is like a home.