LITCHFIELD, Minn. (March 10, 2017) –Bruce Cottington, a Navy veteran of WWII and Korea, donated a bronze bust of Gen. John W. Vessey, Jr. to the Litchfield National Guard unit during the armory’s public open house event March 4. Cottington, a Litchfield resident, commands the Minnesota Chapter of the Veterans of Underage Military Service. VUMS members enlisted in the military prior to the minimum age requirement in order to serve their country during WWII. Cottington received the bust from Vessey, a fellow VUMS member. Both enlisted in the military at the age of 16.

The highlight of the 334th Brigade Engineer Battalion open house was the unveiling of the sculpture. The unit was very supportive when Cottington proposed donating the sculpture. The Litchfield community has always been very supportive of the National Guard over the years, so the open house was a chance to say ‘thanks’ to their neighbors. “This was a great opportunity to honor Bruce and to honor Gen. Vessey,” said B Co., 334th Brigade Engineer Battalion Commander, Capt. Seth Goreham. Bravo Company also has a tight relationship with the local American Legion and VFW. Many Litchfield citizens are former members of Bravo Company, or the unit’s predecessors A Co, 682nd Engineer Battalion, and the 849th Mobility Augmentation Company.

Cottington is a well-known supporter of veteran’s organizations and Bravo Company. “Bruce has a very good relationship with our full-timer, Sgt. 1st Class McCann, and is constantly pushing for recognition and benefits for veterans of all branches, but specifically the Minnesota Army National Guard” said Goreham. Cottington is also very proud of the 34th Infantry Division and his brother Keith who was a Red Bull in WWII, serving alongside Vessey.

Cottington was a Navy Radioman 3rd Class in WWII where he served with the 4th Marine Division at Camp Pendleton, California and also volunteered for service in Korea.

Veterans of Underage Military Service represents all branches of the US military. There are an estimated 2,500 “VUMS” still living in the US. The organization’s mission is to protect VUMS rights, enjoy their camaraderie, and preserve their history.

Cottington enjoys telling the story about Vessey addressing a military audience. Vessey asked all the enlisted members to stand up and to the officers he said “Gentlemen, here is my Army.” “I thought that was fantastic,” said Cottington, “There was a real man. He really got respect from the troops.”

Vessey received a battlefield commission during the Battle of Anzio while serving in the 34th Infantry Division in World War II. He also served during the Korean and Vietnam Wars. In 1982, President Ronald Reagan appointed him Chairman of the Joint Chiefs of Staff. He was the last four star general who was also a combat veteran of World War II on active service. When he retired in 1985 at the age of 63, Vessey was the longest-serving active duty member in the United States Army. He was laid to rest Sept. 1, 2016 near Camp Ripley next to his wife Avis.

The late Roger Brodin, of Brodin Studios, Kimball, Minn. created the GEN Vessey bust based on life studies of Vessey. Cottington and a 682nd Engineer Battalion family modeled for a Brodin sculpture installed at Fort Hood, Texas. Brodin Studios is currently working on a Red Bull Memorial statue for the planned Freedom Walk of America in Rosemount, Minnesota.

Serving his country at 16
http://www.crowrivermedia.com/independentreview/news/community/serving-his-country-at/article_35ca46a7-3b0b-56f3-80a6-83aee6c8ca04.html

Large military statue to be erected at Fort Hood has local ties
http://www.srperspective.com/2013/07/large-military-statue-to-be-erected-at-fort-hood-has-local-ties/

‘I’m proud of all of you veterans’
http://www.crowrivermedia.com/independentreview/news/i-m-proud-of-all-of-you-veterans/article_6f63b11a-7cce-5d00-9e9e-70b765bb24ef.html 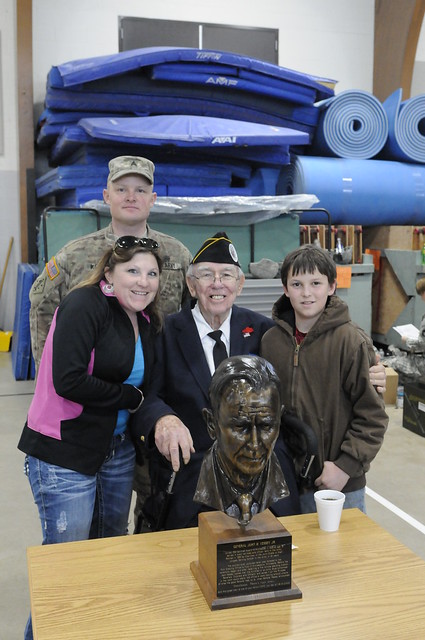