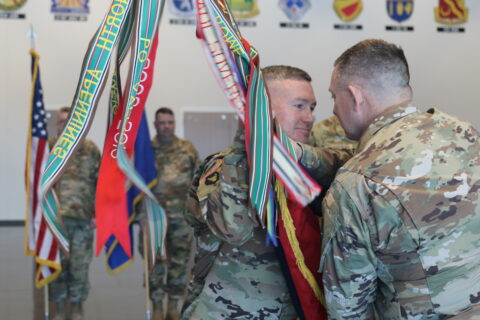 These were the words of outgoing Commanding General of the Minnesota National Guard’s 34th Red Bull Infantry Division, Army Maj. Gen. Michael Wickman, who has led the division since November 2019. He relinquished command to Army Brig. Gen. Charles Kemper, in a ceremony in Arden Hills on March 12, 2022.

“During his tenure as the commanding general, General Wickman was instrumental to the overall success of the 34th Infantry Division during an unprecedented time of operational requirements, social turmoil, and unique support requirements,” said Army Maj. Gen. Shawn Manke, adjutant general of the Minnesota National Guard.

Subordinate units from across the division have been involved in significant federal missions over the past two years. The 1st Armored Brigade Combat Team was the first unit to undergo a training rotation at the National Training Center at Fort Irwin, California, since the beginning of the COVID-19 pandemic. This paved the way for the rest of the U.S. Army to continue its training missions there. The 34th Expeditionary Combat Aviation Brigade aided in the evacuation of the U.S. Embassy in Baghdad in December of 2020. Task Force 1-194 sent troops to aid the evacuation mission at the Hamid Karzai International Airport in Afghanistan. The 1st Battalion, 194th Field Artillery Regiment operated counter-rocket, artillery and mortar missions in both Iraq and Afghanistan. The 34th Military Police Company and 2nd Battalion, 135th Infantry Regiment supported security missions at Guantanamo Bay, Cuba and the Horn of Africa, respectively. Finally, the recently returned 177th Cyber Protection Team supported a federal operation in 2021.

All of those missions took place while troops across Minnesota supported civil unrest, COVID-19 testing and vaccination, as well as transitional care support in community facilities.

“When you see the world in turmoil, you will see the Red Bull patch. I say that with honor and pride,” said Wickman.

Wickman will move forward in his career as the U.S. Army Europe and Africa deputy commanding general for the Army National Guard.

Kemper, his successor, has been an Army officer since 1995 and a member of the Minnesota National Guard since 1999, spending most of his tenure in the force as a Red Bull. He has previously served as the assistant division commander for both support and later, operations.

Senior leaders from across the Department of Defense have repeatedly recognized the accomplishments of the 34th Red Bull Infantry Division and the collective hard work of Red Bulls Soldiers.

“To each of you– your continued service directly contributes to the continued security and freedom the people of the United States have enjoyed now for over two centuries,” Kemper said. “It is not without cost and it will continue to require the selfless service that each of you have epitomized as the 34th Infantry Division ‘Red Bulls.’ You know and accept that cost of service; thank you for continuing to choose to serve with me. Attack!”