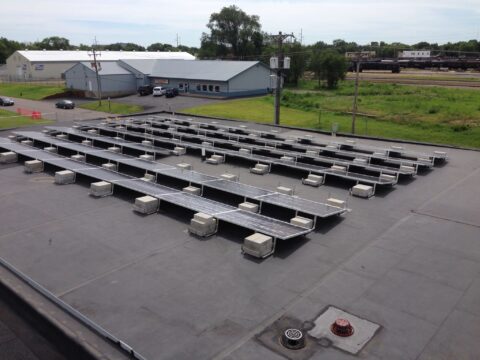 In the broadest sense, the goals of armory renovations are to extend the useful life of the facility by 20 years or more through a comprehensive and holistic restoration or replacement of most facility components. The updates address space shortfalls with new additions when possible. They bring facilities into compliance with accessibility, life safety, energy, and building codes. They bring windows, doors, and parking standoff into compliance with Anti-Terrorism Force Protection regulations. The updates also create energy resilience through usage reduction and installation of back-up power generation and on-site propane systems.

Minnesota National Guard unit leaders recognize the increased mission capability afforded by modernized facilities. “The upgrades to the St. Cloud armory give our soldiers the kind of modern, state-of-the-art facility they need to support our state and federal missions,” said Lt. Col. John McRae, commander of the 682nd Engineer Battalion, the largest unit at the facility. “This investment will pay dividends for years to come in readiness, retention, safety, and sustainability.”

In St. Cloud, the renovations included relocating the main entrance to the south side to face the main parking lot. The new entrance includes a double door vestibule the old building did not have. The facility received expanded locker rooms, a remodeled kitchen, an elevator, removing interior walls, and enclosing a courtyard to create additional office space.

Energy efficiency was also a major objective. The envelope of the building’s exterior was a significant concern for the Minnesota National Guard Energy Manager Robert Jefferies. The National Guard constructed the St. Cloud Armory in 1962, Jefferies explained. “As was common practice of the era, the exterior walls were not insulated.  During the project, we added two inches of rigid foam insulation to all exterior walls followed by (typically) a drywall finish layer. The insulation extends to the underside of the roof surface. This feature aids in heat retention. It was past commercial practice to stop the exterior insulation just above a false ceiling. We replaced all exterior windows with fixed windows. These windows will exhibit much less air infiltration and reduce the draft typically found with older windows. The building’s new ventilation control system will allow the building to be slightly pressurized further reducing the drafts commonly found in older armories.”

The building features a state-of-the-art solar photovoltaic system. “In compliance with Federal Law and Army guidance, this building has a renewable electricity generation system on the building site that is designed to meet 2.5% of the building’s electrical needs,” said Jefferies. “The system consists of 52 panels arranged in two strings.  Each string of 26 panels feeds a Solar Edge model SE9KUS inverter, which outputs 18KW. This system is mounted on the roof of the vehicle maintenance bays.”

The building has an unusual thermal storage cooling system.  “A conventional cooling system’s chiller would be sized to meet maximum cooling needs, which will typically occur during the afternoon,” said Jefferies. “This building has a smaller chiller and a thermal storage system that allows the smaller chiller to meet the building’s cooling needs. This chiller runs at night to freeze 1,300 gallons of water in two tanks adjacent to the chiller. During the day, the ice is used to assist in meeting the cooling loads of the building. The 40-ton capacity chiller still runs to meet cooling load. This reduces the building’s overall electrical demand on the utility provider to meet the building’s peak needs.” Jefferies expects to be able to take advantage of Xcel’s off-peak electric rate to save additional money on operation of this system.