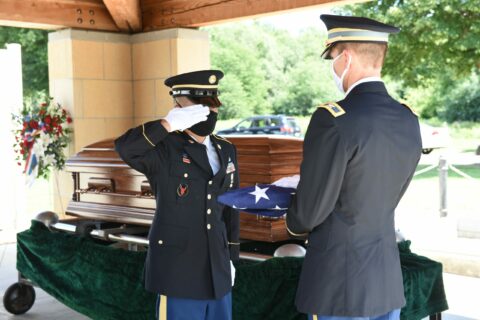 May 29, 2021 (ST. PAUL, Minnesota) — Despite a brief slowdown of operations due to COVID-19 last year, the Minnesota Army National Guard’s military funeral honors program saw a significant milestone in March of this year, surpassing 50,000 funerals supported.

The Minnesota National Guard Military Funeral Honors program began in 2004 and conducted approximately 300 funerals each year in its first few years with limited personnel. Over the past decade, the Military Funeral Honors program has grown significantly and is currently operating with 15 full-time and 30 part-time Soldiers to provide honors for all of Minnesota in four locations: Duluth, Twin Cities, St. Cloud and Moorhead.

Soldiers who participate in the Military Funeral Honors program receive special training to ensure they perform the honors accurately and professionally. Retired Maj. Bastian “Chris” Van Hofwegen has been in charge of the program in the Minnesota National Guard for 14 years. The program now supports an average of nearly 200 funerals each month.

The U.S. Armed Forces provide military funeral honors to active duty Soldiers, retirees and veterans whenever possible. The National Guard Military Funeral Honors program was originally established by Department of Defense Directive 1300.15, on September 30, 1985. The National Defense Authorization Act of 2000 expanded the program to establish the professional, dedicated MFH teams we know today. It provided resources for staffing and training a robust MFH team in each state.

On January 1, 2000, Congress mandated that honors be rendered using a detail of not less than two members of the Armed Forces for any eligible veteran, if requested to do so by the family.  Under the law, at a family’s request, every eligible veteran will receive military funeral honors, to include the presence of a military funeral honors detail, which will oversee folding and presenting the U.S. flag and playing “Taps,” either by a high-quality recording or by a bugler.

The law defines a military funeral honors detail as two or more uniformed military service members, with at least one being a member of the veteran’s branch of military service. Funeral honors can be rendered at any cemetery – private or government-operated. Most funeral directors make those arrangements with the Army Casualty Assistance Center within their region.

With increasing honors requirements, force reductions, base closures, and increased operational tempo, the base-level honor guards now have a challenging mission. In response to the law, the Office of the Secretary of Defense and the military services developed several resources to support this effort, including an instructional toolkit for funeral home directors to ensure honors requirements would be identified and channeled to appropriate honor guard units.