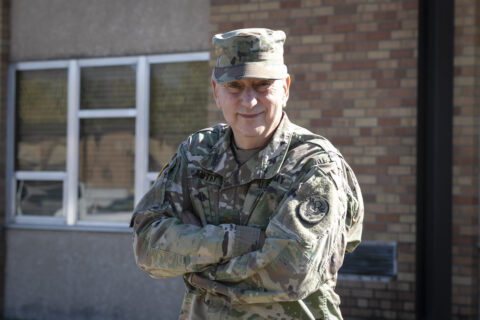 “There were these guys sitting in the room that had polo shirts with an emblem,” said Autrey. “I walked up to them and asked them who they were, and they said they were part of the 55th Civil Support Team – a brand new team.”

Autrey began talking with them and quickly learned they needed a doctor.

“I was kind of nervous, but then I was training with a fire chief in Hastings,” added Autrey. “He praised the 55th up and down the line. He was like if you don’t join that team, you’re dumb.”

Autrey interviewed with the commander of the 55th CST and who hired him, contingent on joining the Minnesota National Guard.

The 55th Civil Support Team is a Minnesota National Guard unit comprised of both Army and Air Force service members. Their mission is to respond to emergencies involving the use or threatened use of a weapon of mass destruction including nuclear, biological, radiological, and chemical, or natural or human-caused disasters.

“There was nobody else that was signing up for it,” said Autrey. “I thought we needed at least one doctor in town who knew something about this stuff.”

“When I went to [the military entrance processing station], there was a whole bunch of 18 and 19-year-olds,” said Autrey, who was 45 at the time.

Throughout his time in the Guard, now Army Maj. Allen Autrey has had the opportunity to effect change for both service members and civilians alike. For example, using a tourniquet was considered malpractice when Autrey was training to become a physician, well before he considered joining the Minnesota National Guard.

“[The 55th CST] started implementing tourniquets for our guys,” said Autrey. “And then I realized that if I send someone to the ER with a tourniquet, they might strip it off.”

It wasn’t long before Autrey and the rest of the 55th CST began putting together a “post-blast protocol” that involved responding to a mass shooting or similar incident. That protocol went on to become 3-Echo, a three phase, enter, evaluate, and evacuate, response that guides the initial 30-minutes after a blast or active shooter event.

The first use of 3 Echo enabled a rapid evacuation of victims following a mass shooting in 2012, which according to Autrey was the first time in the history of the U.S. that first responders were able remove all mass casualty victims within 20 minutes from an unsecured environment.

“It became the model for training in Minnesota,” said Autrey. “A lot of different entities in Minnesota trained on it and still do. FEMA picked up the protocol and developed a national curriculum for it.”

After now 20 years of service, Autrey continues to impact the people of Minnesota and the country.

“There’s always going to be somebody, for some reason that wants to do harm,” said Autrey. “And unfortunately, the technology just keeps progressing, so the best answer is to find systems that counter it. That’s why I believe so much in this program. That’s what the doctor ordered.”

As he prepares for retirement next year, the 55th CST has selected a new practitioner to take over. Autrey’s responsibilities fall on training him in and ensuring a smooth transition between the two providers.

Autrey says that his decision to serve was easy. He added most kids who grew up around the same time as him had parents that had served in World War II or in Korea including several people in his family such as his uncles, father, and grandfather.

“Pearl Harbor happened. My grandpa walked down to the recruiting station and signed up,” said Autrey. “My family has always been unquestioning; they never opposed it ever, and they’ve been immensely supportive as I’ve gotten older. They take pride in it.”

Autrey’s list of accomplishments is long, although he chalks it up to just having enough time on the planet.

“I feel really grateful that the Minnesota National Guard allowed me to enter this role,” said Autrey. “The pride of being a Soldier and being part of an organization that started in 1775, which in my belief is the most impactful organization on the history of the planet for good. I am extremely proud to be part of the U.S. Army.”