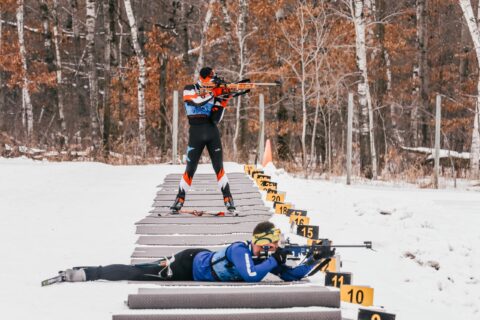 Teams consisting of three shooters and a patrol leader ski a 15K course as a group with each member shooting from the prone and standing positions after each lap in sequence.

Scandinavian hunters were the world’s first biathletes, but the biathlon was first identified as a competitive event in 1767 when Norwegian border security entities competed against one another. When the sport first appeared in the Winter Olympic Games, it was known as ‘military patrol,’ but the name evolved until the 1950s when it became more known as biathlon.

The rifle, carried on the athlete’s back, should be a .22 caliber and have a minimum weight of 3.5 kg. According to the official IBU rules. Biathletes are only given one bullet per target, so the need for balanced breath and precision is essential. Missed shots result in a penalty, generally 150 meters penalty laps for each missed target. This process repeats itself at each firing range throughout the course.

The biathlon program would go forward to exemplify the fundamental skills this sport brings out in a service member. The ability for troops to be agile and capable of hitting targets precisely while on/off skis proved to be a clever method for military training.