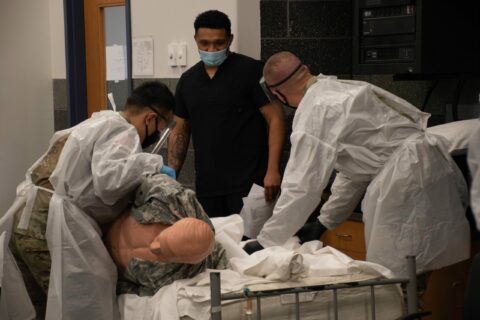 December 7, 2020 (ST. PAUL, Minnesota) — Soldiers and Airmen from the Minnesota National Guard are experiencing first-hand the impacts that COVID-19 is having on residents in long-term care and the staff who care for them as they find themselves stepping in to fill a staffing void for facilities in need across the state.

“I know I am safe in saying not one of our Soldiers or Airmen envisioned themselves performing care in a long-term care facility when they voluntarily rose their hand to serve our nation and our state,” said Maj. Gen. Shawn Manke, the Adjutant General of the Minnesota National Guard. “And I whole heartedly wish were not needed for this mission. But the fact is we are. These residents in long-term care facilities are real people who need real care.”

The Minnesota National Guard currently has nearly 600 Soldiers and Airmen supporting the state of Minnesota’s COVID-19 response. More than 370 of those Guardsmen are assigned to teams that are available to support long-term care facilities throughout the state. To date, the Minnesota National Guard has supported 17 long-term care facilities with that number expected to rise in the coming weeks and months.

“When I joined the Guard I didn’t expect to be put into a scenario where I’m helping at a long-term care facility,” said Pfc. Hamza Ahmed Mohamed, a tactical power generation specialist with the 434th Support Maintenance Company. “But doing it and being able to help out in my community has been a great pride of mine.”

The Soldiers and Airmen are working as temporary nurse’s aides in long-term care facilities with staff that have been hit hard by COVID-19. The Guardsmen receive three days of instruction in basic patient care tasks such as patient transfer and bathing. They are then placed into teams with a Minnesota National Guard nurse or medic so they can be assigned to a facility.

“I’m just really proud of these soldiers,” said Master Sgt. Samuel Williams, one of the instructors for the training. “It’s so fun to see as we progress through the course how they embrace these tasks and then they gel as a team, knowing that they’re not going to be alone and that they’ll work together to meet the needs.”

The Minnesota National Guard is protecting its Soldiers and Airmen by ensuring each member is tested when they come on duty and as needed while they are on duty. Each Guardsman is screened daily and provided with personal protective equipment for the missions they are assigned. Between each facility they support, the Soldiers and Airmen have to undergo a quarantine period and may have a brief opportunity to spend a few days with their family before their team is assigned to a new location.

While the Minnesota National Guard has supported many state activations this year, including the activation of 7,000 Soldiers and Airmen in response to civil unrest at the end of May, this mission is unique in the length of time Guardsmen are being asked to leave their civilian jobs and families. The community-based testing and long-term care facility support missions may last for a few months. Despite the uncertainty, the morale among the Guardsmen remains high, especially after they’ve had the opportunity to get into the facilities and see the difference their presence has for those who live there.

“I think the attitude has been great in the classroom because it’s definitely something people want to be good at,” said Air Force Capt. Greg White with the 133rd Airlift Wing. “It’s incredibly important that this is a mission we pursue and we take care of because in the Guard we’re supposed to take care of our neighbors.”

The long-term care facility support began in November and many Soldiers and Airmen found themselves spending the Thanksgiving holiday away from their families. The same will most likely be true for the Christmas holiday. And though it’s hard to be away from family, the Guardsmen recognize that many of the residents in the facilities they’re serving have been isolated from their own families for an extended period of time due to COVID.

“It’s always a pleasure to serve the citizens of the state of Minnesota, primarily in those long-term care facilities where a lot of these senior citizens haven’t had the chance to see their families since April when COVID started,” said Col. Scott Rohweder, the Director of Operations for the Minnesota National Guard. “It’s a huge honor to be able to support them and provide that aid that they need.”

For many of the Soldiers and Airmen, this mission has been an eye-opening experience that has brought them out of their comfort zone and shown them a new perspective. While it might not have been what they expected when they joined the Guard, helping the community is one of the reasons many choose the National Guard, and this has been a unique opportunity to do just that.

“You don’t have to go across the country, you don’t have to go anywhere,” said Pfc. Cody Johnson, a mechanic with the 434th Support Maintenance Company. “It’s right here – it’s in our backyard – that’s where we’re needed, and it’s not just the one facility we’ve been at here, it’s all of them.”