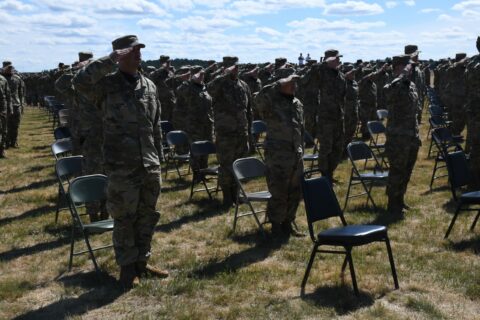 June 20, 2020 (CAMP RIPLEY, Minnesota) — Soldiers from the Minnesota National Guard’s 2nd Battalion, 135th Infantry Regiment were honored June 19, 2020, at Camp Ripley prior to deployment to the Horn of Africa.

“Training for these missions requires strength and perseverance,” Minnesota Governor Tim Walz told the Soldiers remotely via video message. “You’ve done all that, you’re ready for the moment. In these extraordinary times, COVID-19 has changed the way that you’ve had to prepare and the ways that you’ve trained.”

Upon arrival at Camp Ripley, the Soldiers received COVID-19 tests and have been quarantined together for training. They will travel on to Fort Bliss, Texas, where they will conduct additional training prior to departure.

Due to ongoing COVID-19 restrictions, families were unable to attend the departure ceremony in person. Serving Our Troops, a St. Paul-based organization of community and business leaders, hosted the ceremony and provided steak dinners to the Soldiers and grill boxes for families to participate in the ceremony remotely. Since 2004, Serving Our Troops has served more than 100,000 steak dinners to service members and families around the world.

The ceremony was unique in many ways, with virtual messages from community, business and elected leaders, in front of a socially-distanced formation spreading across the field at Camp Ripley. The absence of families was felt the most, with families tuned into the live feed and connected by Zoom from their backyard barbeques. Many families sent video messages to their loved ones.

“We’re here to serve today because of the love and support of our families,” said Maj. Gen. Jon Jensen, the Adjutant General of the Minnesota National Guard. “So whether they’re here physically or if they’re online watching us, we know that we can only do our mission because of their support and their love.”

The 2-135 Infantry has a long and proud history of service to the nation, dating back to the First Minnesota Regiment’s service in the Civil War.

“It was the First Minnesota whose shared courage and blood saved the Union that day near Plum Run on Cemetery Ridge during the Battle of Gettysburg,” said Lt. Col. Chip Rankin, the battalion commander. “It was our regiment that answered again the call during the Spanish-American War, the Philippine Insurrection, the Mexican Border War and World War I. In World War II, it was our regiment that served with distinction and whose Soldiers formed the first majority of the 1st Ranger Battalion. More recently, our regiment has served in Iraq, Kuwait, Afghanistan, Kosovo and the Sinai.”

“As a fellow American, I feel blessed that we live in a nation where citizen-soldiers such as us are willing to answer the call to duty in a time of war or peace, at home and abroad,” said Rankin. “At the heart of our nation’s defense stands a citizen-soldier – men and women from every color, every walk of life – from small towns to big cities.”