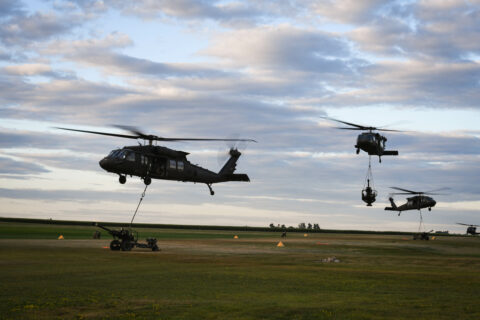 “Minnesota artillery units predominantly own M109 Paladin and M777 [towed 155mm] howitzers,” said Capt. Michael Driscoll, Alpha Company commander. “Both are too heavy for a UH-60 Black Hawk [helicopter] to lift. The Iowa artillery unit own M119A3 [105mm] howitzers which are light enough to lift with our aircraft. This gives our unit a chance to plan a sling load mission and pick up a load that is different then we normally get to do.”

“Sling loading artillery was designed to bring artillery pieces from behind the front line,” said Sgt. Nathan Buck, standardization instructor with Bravo Company, 834th Aviation Support Battalion. “Artillery may not have the range to reach a specific target so it may be required to be carried beyond the front line by helicopter.”

Driscoll goes on to explain how artillery raids are an important element to aviation’s role in the overall defense strategy.

“As large-scale combat operations are further becoming the focus in the Army, aviation will be used in a multi-domain environment to enhance the ground tactical plan,” said Driscoll. “Artillery raids give ground commanders the ability to rapidly emplace artillery beyond the forward line of troops, execute a fire mission, and extract the artillery equipment and personnel.”

All UH-60 Black Hawk helicopter pilots and crew chiefs must be qualified to conduct sling load training as part of their readiness level progression training. That training must be recertified every year to remain proficient in the task.

“Sling load training is one of the more difficult tasks being performed,” explained Buck. “Crew chiefs are responsible for making sure the load has been properly inspected and the overall safety of the sling load operation. Since the pilots cannot see the sling load underneath the aircraft the crew chief is responsible for directing the aircraft over the load. It takes many iterations and good crew coordination to make this mission work.”

Another unique element to this training, is that it was conducted during an additional flight training period, known as AFTPs, instead of a normal drill weekend.

“AFTPs are granted to all aviators in the National Guard and reserves to be able to fly throughout the week, to maintain proficiency and provide additional training for aircrews,” said Driscoll. “Rarely do we have the opportunity to conduct a complex mission such as an artillery raid with a unit out-of-state on a Thursday evening.”

This is the second AFTP mission that 2nd Battalion, 147th Assault Helicopter Regiment has conducted this year.

“Being a UH-60 crewmember isn’t the traditional guard schedule,” explained Buck. “So, I appreciate the dedication it requires.”

The five UH-60 Black Hawks, ten pilots and ten crew chiefs met with the Iowa National Guard members in a field just outside of Esterville, Iowa and conducted the sling load operation swiftly and proficiently. Like all successful missions, it could not have been conducted without strong partnerships between individuals, units, and our communities.

I’d like to thank the Iowa National Guard, specifically Alpha Battery, 194 Field Artillery, for working with us and being so accommodating,” said Buck. “And thank you to the Estherville Airport and the people of Estherville for allowing us this training opportunity.” 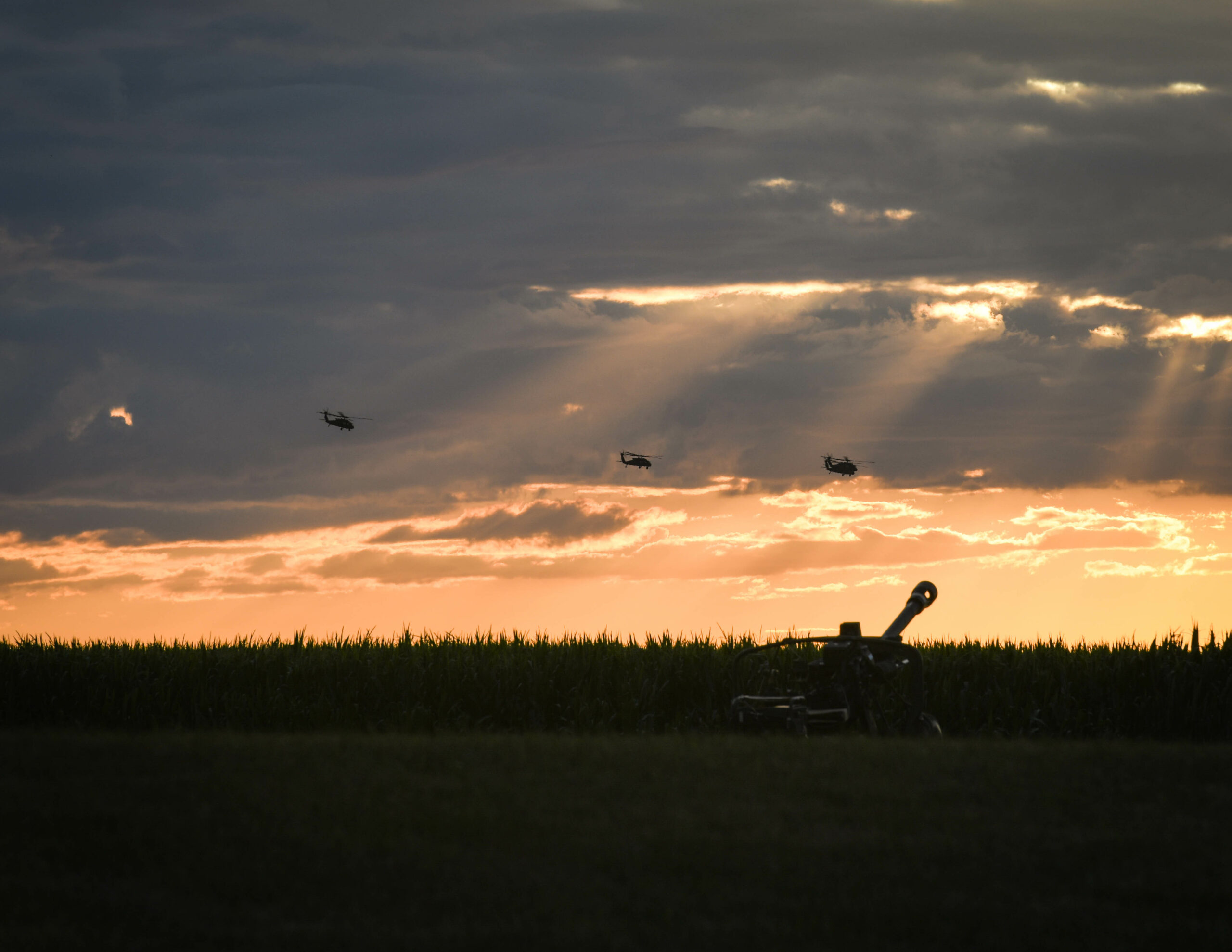