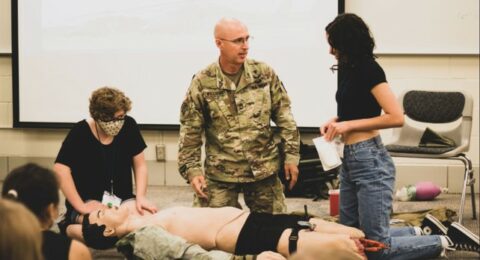 September 17, 2021 (COTTAGE GROVE, Minnesota) — A love of military medicine started from an early age and became a military career for 26 years and for the Minnesota National Guard’s Office of the State Surgeon’s noncommissioned officer in charge, U.S. Army Master Sgt. Samuel Williams.

“I love engaging the students,” he said. “It is so fun to see that light come on as they think about ‘Wow, maybe I want to do this.’”

For two years, Williams has instructed at the HOSA’s Scrubs camp, an immersive healthcare career exploration camp where students across Minnesota can learn about different opportunities in medicine, including with the Minnesota National Guard.

“My slice of the pie is the military medicine,” he said.

He teaches students how to conduct a combat casualty assessment with mannequins that replicate what could happen on the battlefield. Some students find it exciting, but it isn’t for everyone. For those interested in a Minnesota National Guard medical career, recruiters are available to explain the benefits of serving.

Williams began his career as a combat medic. After serving ten years on active duty, he returned to the Minnesota National Guard and deployed to Iraq. In 2011, he started his career as an Active Guard Reserve Soldier medical instructor at the 175th Regional Training Institute.

He became interested in medicine through caring for others, particularly his brother, growing up. And he had a fascination with the workings of organisms.

Williams will soon be retiring from the Minnesota National Guard but will continue to contribute to his community through mentoring youth, being a foster parent, and a member of the board for Bread to the Nations.