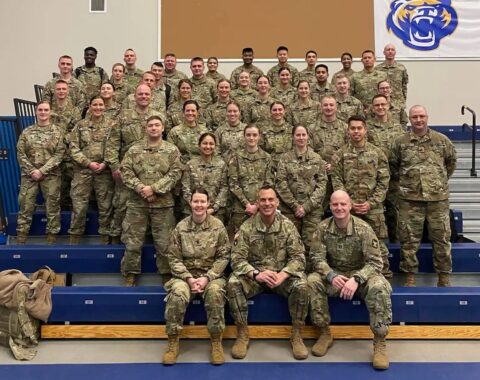 May 14, 2022 (KODIAK ISLAND, Alaska) – Minnesota National Guard service members with the 204th Medical Company Area Support (MCAS) mobilized to Kodiak, Alaska in support of Arctic Care 2022, May 3-14. Arctic Care is an annual Innovative Readiness Training program which partners with the Kodiak Area Native Association, providing medical, dental, optometry, and veterinary services at no cost to residents of the remote area.

The training is a collaborative program that leverages military contributions and community resources to produce mission ready forces, civil-military partnerships, and stronger communities.

The 43 Minnesotans joined more than 200 other service members across several branches of the United States military. Traditionally, the 204th MCAS provides health support to units located in areas of combat operation.

The exercise provided a training opportunity for service members to apply their military medical skills in a civilian community and perfect their abilities in a deployed environment.

Service members split into four teams made up of a variety of units, jobs, and branches providing a joint training environment for all. The teams traveled to seven locations to provide support throughout the island including the villages of Karluck, Larsen Bay, Old Harbor, Akhiok, Port Lions, and Ouzinkie while learning about the native cultural values.

“This was 100-percent, hands down, the best training experience for any medical [Soldier] or Soldier in general,” said Sgt. 1st Class Jessica Howell, 204th’s readiness noncommissioned officer who also served as Team Four’s noncommissioned officer in charge during the exercise. “We had [National Guard], Air Force Reserve, active Air Force, Army, Navy, there was even the United States Public Health Services.”

In addition to working with several medical elements, Minnesota service members had the opportunity to cross-train in veterinary, pharmacy, and ophthalmology services.

“We had medics working with vets,” said Howell, who has served for more than 13 years. “We had veterinarians pulling teeth and our medics were able to assist at times. That cross-training is something that you will never get without an experience like this.”

Throughout the 10-day mission, service members provided a total of 6,199 procedures.

“Some of the villages there, they don’t have providers that show up, some will never even have a dentist ever,” said Howell. “Most of us felt very humbled, to be able to be there and actually do our jobs in the medical field with U.S. citizens that are in need of it.”