Minnesota medics care for Afghan evacuees in the Middle East 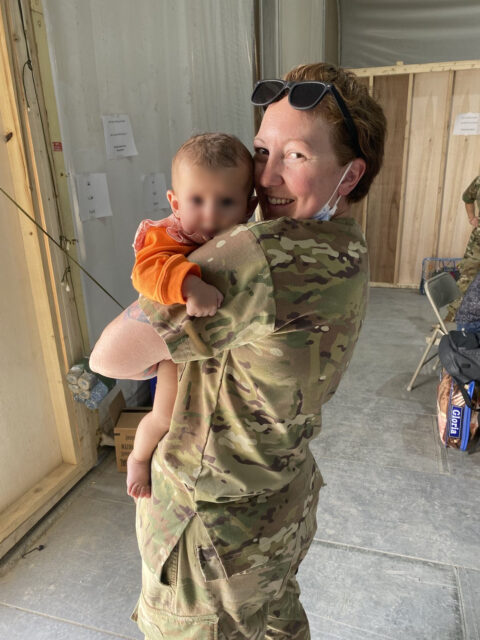 Within 12 hours of initial notification, Charlie Company began medically in-processing Special Immigrant Visa holders and other evacuees who were transported to Kuwait in support of Task Force Freedom. Each evacuee who arrived at Camp Buehring, Kuwait was tested for COVID-19, given a brief medical survey.

“It was truly amazing and highly impressive to see the passion and level of knowledge our medics and providers displayed,” said 2nd Lt. Hunter Hiemstra, Charlie Company’s executive officer. “As an emergency room nurse on the civilian-side, I personally know how quickly patients can deteriorate in situations as such. To personally witness the quick initiative each medic and provider took, gave me a great sense of pride for the C Company, 134th team.”

Many of the families arriving from Afghanistan had few-to-no personal possessions with them, and in some cases they did not have required personal medication, clothing, diapers or baby formula. The vast majority of incoming personnel were suffering from severe dehydration from lack of food and water for several days as they focused on departing Afghanistan.

“Our Medical Company is designed for treating Soldiers wounded in combat,” said Lt. Col. Jake Helgestad, commander of Task Force 1-194. “However, their training for combat medicine and fast paced medical treatment allowed for successful execution of this rapidly developed, unique mission. We could not be more proud of our medical team.”

Despite their adverse circumstances, Charlie Company Soldiers saw that the evacuees from Afghanistan were grateful for their temporary safe haven. Many of the families had young children, and TF 1-194 Soldiers took great joy in handing out candy, making balloons out of medical gloves, and playing tag with them while they waited.

“We put on this uniform for a reason; we trained for a mission like this,” said Spc. Jasmine Eggert, a patient administration specialist with TF 1-194. “We were able to put everything we learned into two weeks, and it wasn’t difficult. It was amazing to be able to know that we signed the dotted line for a reason. This mission gave me purpose, and a view into what the Army is supposed to be doing.”

As Charlie Company’s medics conducted medical screening and in-processing, many of the evacuees assisted in translating for others in order to help ensure those that needed to see a doctor on-site were identified.

One interpreter stated to a service member, “You have all helped us so much, the least I can do is assist here for you.”

Shortly after the first flight from Afghanistan landed, Charlie Company established a medical facility near the in-processing center. This medical facility had trauma capability, a laboratory, dental capability and x-ray services available to promptly and definitively diagnose and treat their new patients’ medical issues. Twenty-four-hour medical operations were established to offer walk-in care, with a primary focus of supporting nearly 50 expecting mothers, many children and newborns, and patients with chronic medical issues like diabetes. Within the first eight days of operations, Charlie Company has treated more than 1,000 evacuee patients.

“I don’t think I will ever forget any part of this mission,” said Hiemstra. “Watching how hard each Soldier of C Co. 134th worked, to ensure the Afghan people were taken care of was impressive. Additionally, I was amazed by the level of gratitude and respect each Afghan treated us with. Knowing that they had lost essentially everything, they still maintained such a high level of hope and gratitude for having been evacuated.”