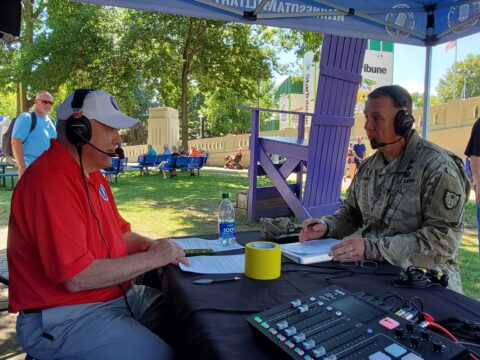 For over 12 years, the Minnesota National Guard has had a unique outlet with which to communicate its stories of service to the communities of Minnesota. Since its inception, Minnesota Military Radio has been a product of partnership and community support.

In 2010, then-host of Twin Cities News Talk Drew Lee, approached former Air Force non-commissioned officer and Veteran of the Vietnam War Tom Lyons, about hosting a radio show dedicated to the over 308,000 service members and veterans across Minnesota. Lee was essential in onboarding the support of iHeart Media, who generously donated studio time and an engineer to produce the show each week. Tom Lyons, meanwhile, sought the approval and participation of then Minnesota National Guard Adjutant General, Maj. Gen. Rick Nash.

After the initial players offered their blessing on the idea, investments into the program began to be made. As the show grew, the production team was conceived to include the Minnesota National Guard, the Minneapolis VA Medical Center, the Minnesota Department of Veterans Affairs, and Beyond the Yellow Ribbon. From its home on a single Twin Cities radio station 12 years ago to 65 stations across the state today, Minnesota Military Radio has cemented its role in the state’s veteran and military community and beyond.

2022 was a year of highs and lows. The pandemic forced the producers to record out of a conference room temporarily, yet the Minnesota Military Radio team overcame the health and technology challenges this brought and consistently produced the show to standard until they could be in-person again both in the studio and at events across the state. From the MDVA Veteran’s Home in Minneapolis to the Minnesota Association of County Veterans Service Officers conference in Nisswa, Minnesota Military Radio was there to share information impacting the state’s current and former military.

In June, Minnesota Military Radio lost its biggest advocate and friend, Drew Lee. The longtime co-host of the Justice & Drew show on Twin Cities News Talk died unexpectedly, causing a ripple of sadness among those who knew him.

But as the adage suggests, and as Drew would have expected—the show did go on.

The program celebrated recording its 600th unique show this year, never airing a repeat since hitting the airwaves in 2010. The show also created an archive for all its past and future shows that will be housed at the Minnesota Military and Veterans Museum.

The show continues to operate in lockstep with military and veteran organizations across the state. Minnesota Military Radio has been instrumental in sharing the stories of the Minnesota National Guard and following them as they travel around the world. The program has also been vital to communicate to veterans the benefits available to them. With 13 years and 700 shows on the horizon, Minnesota Military Radio plans to continue its mission for years to come.

To learn more about Minnesota Military Radio or listen to any of the shows throughout the years, visit https://minnesotamilitaryradiohour.com/.