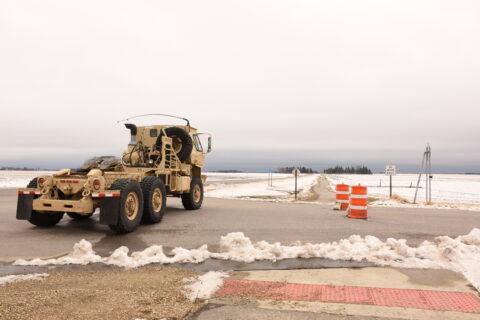 Thursday, April 11 at 6 p.m., Soldiers of the 224th Transportation Company in Austin were activated.  Throughout the evening Soldiers arrived, with 134 working through the night providing traffic control with police while workers performed restoration maintenance on power lines.  As of noon today, 30 Soldiers are supporting the manning of five traffic control points in Mower County.  Sixty Soldiers are supporting the manning of 19 traffic controls points in Freeborn County. The remaining personnel are providing maintenance, as well as delivering fuel and food to Soldiers. Vehicles from Olivia and Rochester, along with Austin are being used in the response.

This is the third State of Emergency for the Minnesota Army National Guard in 2019.  Other winter storm activations include February 7-8 in Renville County and February 23-24 in multiple counties. Additionally, the Minnesota National Guard provided Emergency Management Assistance Compact (EMAC) assistance to the State of Nebraska from March 19-28.

About the Minnesota National Guard