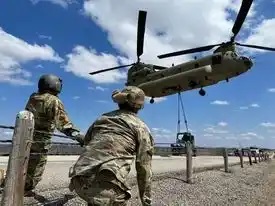 St Cloud, Minn. – Today, five Minnesota National Guard Soldiers departed with one CH-47 Chinook to provide heavy-lift support for flood response operations occurring in North Dakota.
“This mission is to move two, 10,000-pound pumps closer to the Bourbanis Dam located on the Red River in Pembina, North Dakota,” said Army Col. Gregory Fix, Minnesota National Guard’s State Army Aviation Officer.
“The CH-47 Chinook is a tremendous asset for the National Guard,” said Fix. “It has the capability to lift heavy loads greater than 10,000 pounds, and moving the two pumps for flood support is just one example.”
The Guard members and aircraft are from the St. Cloud-based B Company, 1-171 Aviation Regiment. The Soldiers and aircraft departed before 10 a.m. and are expected to return this evening.
“This aviation unit has many hours of experience moving equipment,” said Fix. “They recently returned from a deployment to Iraq and Kuwait. While deployed, the unit provided the aerial movement of troops and supplies throughout the area.”
North Dakota requested support through the Emergency Management Assistance Compact, a mutual aid agreement to share resources between states.
“The Minnesota National Guard is Always Ready, Always There, to support our neighbors if needed,” said Fix. “We’ve worked with North Dakota multiple times during floods and in 2019, our aviators delivered hay to cattle in Nebraska due to extreme flooding in the area.”