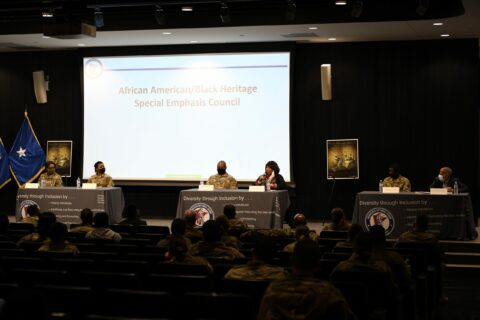 “I’m so proud to serve with all of you,” said Brig. Gen. Sandy Best, Deputy Adjutant General of the Minnesota National Guard and also the Executive Champion of the African American/Black Heritage special emphasis council. “I sincerely appreciate your service and you sharing your personal stories – all great examples of how black history is being made every day in the Minnesota National Guard.”

February marks Black History Month, a tribute to African American men and women who have made significant contributions to America and the rest of the world in their respective fields. The military history of African Americans spans from the colonial history of the United States to the present day.

During the panel, participants spoke about their experiences and answered questions about why they joined the Minnesota National Guard, what their goals are for the future and how they have overcome obstacles to get where they are.

LaGarde spoke about what motivates her to succeed in her position at the 148th Fighter Wing. “I have a young son who’s nine years old. So I want him to see me as a positive role model. I want to influence him and everyone else around me.”

Steward-Randle shared the importance of having someone tell her early in her career to set her goals high. “As you’re working with Soldiers and you see something in them, tell them and make sure that they know it, so then they have something to work towards and they know that they have self-worth.”

“The focus here is the success that comes from diversity,” said Maj. Gen. Michael Wickman, 34th Red Bull Infantry Division Commanding General. “It adds richness and it benefits us as a community and as a society. But it doesn’t just inform us, it must inspire us as well.”

To watch the video from the panel, visit https://fb.watch/3XJ0WATmIW/.