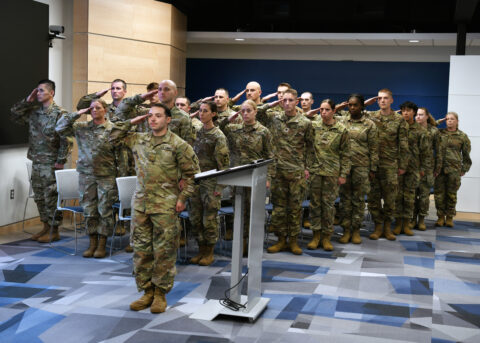 The last year has been busy for Minnesota National Guard members. In 2022, more than 600 service members were federally activated and almost 300 more were activated for state missions such as flood support.

This year the Minnesota National Guard has experienced several ‘firsts’ in each of its three priorities of people, modernization, and partnerships.

“To the entire enlisted corps of the Minnesota National Guard– I have your back,” said Erikson.

This year, Minnesota also welcomed its first female Hmong warrant officer into the Minnesota National Guard and  first Rabbi to the Chaplain Corps. The state even had a Soldier compete in the first-ever Army Best Squad Competition.

In May, the 133rd Airlift Wing received its first C-130 Hercules with the updated eight-blade propeller, signifying the beginning of the second phase of the Wing’s three-phase modernization process. The new propellers deliver more power and efficiency while reducing maintenance. The new propeller is also better during cold weather and arctic operations.

“This aircraft upgrade reinforces our ability to protect our state and nation,” said U.S. Air Force Col. James Cleet, 133rd Airlift Wing Commander. “As our challenges and adversaries change, we require forces, equipment, and training to ensure our national security.”

In 2022, the Minnesota National Guard celebrated more than 25 years of partnership with Croatia and 49 years with Norway.

Through the support of the Department of Defense’s State Partnership Program, the Minnesota National Guard and Croatia Armed Forces have held 31 events focused on collaboration, education, and friendship. The spring and summer of 2022 held multiple aviation exchanges to help prepare the Croatian Air Force for the ownership of their first UH-60 Black Hawk helicopters – making them a greater asset for NATO aviation missions. In June, the state and nation continued the comradery element of their partnership by sending  two enlisted Soldiers to participate in the Croatian International Best Solider Competition for the second year in a row. Additionally, in the fall the Minnesota National Guard brought interagency civilian partners from Minnesota’s Department of Public Safety across the Atlantic to collaborate with members of the Croatian Directorate of Civil Protection during a three-day emergency preparedness conference. This first time civilian to civilian collaboration provided participants with decades worth of combined experience in the field where they could exchange information on disaster risk reduction.

“After 26 years of building the long-term relationship between Minnesota and Croatia, our Soldiers and Airmen have had the opportunity to learn with coalition partners, experience cultural exchanges, and we continue to reaffirm our unilateral commitment in the advancement of multinational capabilities,” said U.S. Army Maj. Gen. Shawn Manke, the Adjutant General for the Minnesota National Guard.