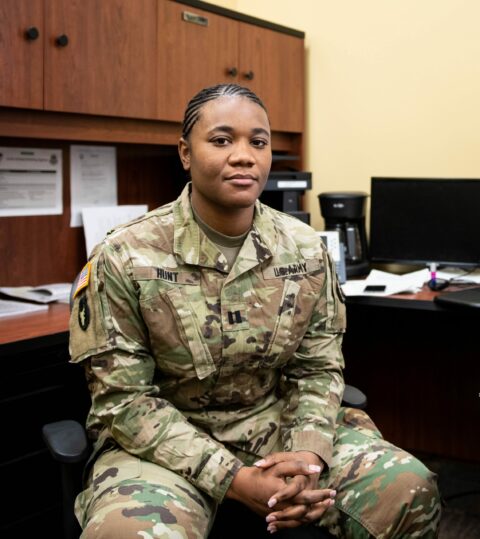 February 10, 2021 (ARDEN HILLS, Minnesota) — Growing up, Capt. Takeisha Hunt was not afraid to set lofty goals. She wanted to be the first in her family to graduate college, and she wanted to join the military.

In 2011, she crossed the first one off the list after graduating from college. Less than a year later, she took the oath to serve in the Minnesota National Guard.

After completing accelerated Officer Candidate School in South Dakota in 2013, Hunt was assigned to the 347th Regional Support Group. A year later, she attended the Adjutant General Basic Officer Leadership Course and returned to Minnesota to serve in the 147th Human Resources Company. In 2016, Hunt was assigned to the 1-151st Field Artillery Battalion in Montevideo, Minnesota.

“I knew that I was going to a unit where I would be the only female in leadership, and the only black leader in the organization,” said Hunt. “It was not that I was afraid of being in that position, but more so afraid of how they would react to me.  Upon my arrival to the unit, I realized that I was in one of the best units in the state of Minnesota.”

In 2018, Hunt deployed as a first lieutenant with 34th Infantry Division’s headquarters battalion in support of Operation Spartan Shield. By working hard to set and stick to the standard, she earned accolades from senior leaders who acknowledged her reputation and professionalism on the deployment.

In 2019 she volunteered to deploy with the 834th Aviation Support Battalion, serving as the battalion personnel officer and Equal Opportunity officer.

“Having been deployed during COVID, the death of George Floyd, the use of Theater Ballistic Missiles, and multiple rocket attacks on bases where our Soldiers were really impacted me. I had found myself this deployment, and understand that there are some hills worth dying on when taking care of Soldiers is concerned.”

Like many leaders, Hunt is following in the footsteps of one of her mentors. She spent six years learning from Col. Angela Steward-Randle who retired in 2018 as the Director of Human Resources, Manpower and Personnel for the Minnesota National Guard.

“I silently watched the way she carried herself for six years and learned so much from her. There are not many great leaders that I admire, but having a leader that looks like you is just another confirmation that I too can make it to these tables.”

Hunt recently took command of the 147th Human Resources Company. The significance of her accomplishments takes on added meaning in the month of February, but that is not the only month when Hunt reflects on her place in the Minnesota National Guard.

“Being a company commander is absolutely something that I reflect on during Black History Month and Women’s History Month because there have not been many that look like me who have served at this level. And I am thankful that I personally have never felt like I didn’t belong in the Minnesota National Guard.”

Hunt acknowledges that there are differences within the force, and recognizing individual differences does not have to be hold negative connotations. Instead, she thinks they should be recognized as something that makes the Minnesota National Guard stronger.